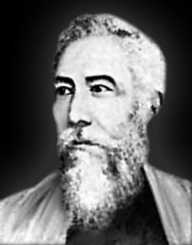 Hindu philosopher and religious reformer  Debendranath Tagore was born on 15 May 1817 in his ancestral home, Jorasanko Thakur Bari in Jorasanko, West Bengal. One of thirteen children, his parents, were Dwarkanath Tagore and Sarada Devi.  Dwarkanath, an industrialist, was a co-founder of the reformist Brahmo Samaj. He had also financed such projects as the Calcutta Medical College

Debendranath Tagore was educated at home up until 1827. He was hen enrolled at the Anglo-Hindu College run by Raja Rammohun Roy co-founder with his father of Brahmo Samaj.  Subjects he was taught included English, Farsi, Sanskrit, English and Western philosophy.

Already becoming vitally interested in religion and philosophy, Debendranath Tagore became involved in his father’s business. The death of his grandmother affected him, and he started thinking deeply about the meaning of life and the role of religion. He applied himself to studying the Upanishads as well as different philosophers. In 1842, he became a leader of the Brahmo Samaj. This society opposed Sati, the authority of the Vedas and also the need for a mediator between the individual and God.

Debendranath Tagore agreed in principle with the philosophy of the society and the ideas, but he wanted to see the Samaj within a Hindu cultural context. He worked on a Bengali translation of the Rig Veda as well as a liturgy for the movement’s worship. He introduced this in 1845 along with devotional songs he had composed. Keshub Chunder Sen disagreed as he was moving more towards Christianity.  During 1850, Debendranath Tagore had changed his mind regarding the Vedas.  By 1866 their differences were irreconcilable and caused a  division. Sen broke away, taking the name  Brahmo Samaj with him. Those left behind called themselves the Adi Samaj.

Debendranath Tagore was Secretary of the British Indian Association in the 1850s. He used this role to promote India’s political autonomy and universal primary education. He was a supporter of democracy and spoke out against the traditional authority of religion and politics in India.

Debendranath Tagore was an advocate for universal primary education in India as well as raising the literacy rate.
He also advocated and worked for tax reductions for the poor.

Debendranath Tagore saw that it was possible to combine the best of Western ideals with Indian culture.
A spiritual man he never saw any reason to curtail his business affairs. He lived as a spiritual person who enjoyed material possessions, but with a fair amount of detachment.