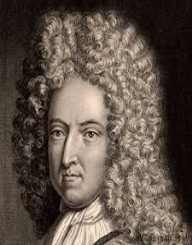 Daniel Defoe was born on September 13, 1660, in London, England. His parents were James and Annie Foe, and his mother died when he was approximately ten years old.

As a child, Defoe witnessed several significant events for England. The first was the Great Plague of London in 1665, where 70,000 people died.

The second event was the Great Fire of London in 1666. Only three houses remained standing in Defoe's neighborhood, and one of them was his.

The third event when a Dutch fleet sailed up the Medway River and attacked Chatham.

Defoe studied at a boarding school, followed by a dissenting academy in London. His parents were Presbyterian dissenters.

Daniel Defoe started his business career as a merchant. He dealt in several commodities including wine, hosiery, and woolen clothes.

He bought an estate in the country and a ship, but in 1692, he declared bankruptcy.

In 1684, Defoe married Mary Tuffley. Her father was a merchant in London, and as a result, Defoe received a large dowry for the marriage. The couple had eight children, and they were together for fifty years.

In 1688, William III and Queen Mary ascended the throne. Consequently, Daniel Defoe became a secret agent and a very close ally for William.

In 1692, law enforcers arrested Defoe for debts of 700 pounds. After his release, Defoe traveled to Europe and Scotland. He returned to England in 1695, and he had changed his name from Foe to Defoe.

Historians credit Daniel Defoe with writing well over 500 works. These include novels, non-fiction, pamphlets, and essays.

His first notable work was an essay on economic and social improvement, and he published the article in 1697.

In 1702, William III died. As a result, Queen Anne ascended the throne and began to persecute nonconformists such as Defoe. His political activity made him an easy target.

The authorities arrested Daniel Defoe on 31st July 1703 and put him in a pillory for three days. He then went to Newgate Prison.

A week after Defoe left prison, the Great Storm of 1703 took place. The storm became the subject of a book for Defoe, entitled, The Storm, released in 1704.

Over the next few years, Daniel Defoe continued to write. Harley employed him, and Defoe published The Review every week, then three times a week. The English government used the publication to promote its Act of Union 1707.

His non-fiction work included The Storm (1704), and The Complete English Tradesman (1726).