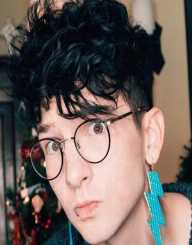 The Beacon of Happiness and Positivity: Damon Fizzy

Damon Fizzy (aka Deefizzy) is an American Online personality and emo Youtuber who started off his journey to stardom with the aim of making people around him happy. Damon was born on 8 November 1991, in a white American family in California. He spent his entire childhood in Spring Hill, Florida and was raised with his younger brother Devon Fizzy. Not much is known about his parents, but as per his verified Facebook page @deefizzyviewers, Damon was brought up by his single mother. The two fizzy brothers were a bunch of loud, mischievous kids and hence, the family often had to shift in different apartments.

Damon Fizzy began his journey in the year 2008 by posting a video on YouTube titled ‘Chicks Dig Me Because I Wear Axe.’ Following his debut, he started posting different kinds of videos featuring jokes and entertaining content. The main aim of all his videos was to spread happiness. This unique characteristic is the main reason behind his popularity. All his initial videos became immensely successful, and Damon enjoyed a huge fan following on all his social media channels.

Damon started operating two YouTube channels by the names DamonFizzy and DeeFizzy. Both the channels featured different kinds of entertaining videos, but the motto behind all the videos was same - making people happy. Both his YouTube channels gained tremendous popularity, especially amongst the youth and teenagers.

After achieving a substantial amount of fan following on his social media channels, Damon Fizzy decided to boost his image further. With this in mind, in 2015, he collaborated with fellow Youtuber Matthew Lush and posted a makeover video titled ‘The New Me.’ The video showed Fizzy in a new light and was instrumental in establishing him as a major Internet personality. In the same year, he began giving live performances on YouNow. The recordings of those performances were later posted on his YouTube and other social media channels. Devon Fizzy, Damon’s younger brother, appears in many of his YouNow videos.

Unlike other internet personalities, Damon Fizzy started his journey a bit late in life but has managed to carve a niche for himself in the entertainment world. The matured star is a youth icon and has a huge fan base. In 2014, Damon also worked with Vans Warped Tour. Seeing his popularity, corporate giant Ford invited him to be an Agent for the Fiesta Movement. Fizzy turned an entrepreneur by launching his e-commerce website that retails merchandise like T-shirts and Wristbands.

Known to be one of the coolest artists in the USA, Damon Fizzy stays true to his positive image by keeping himself happy all the time. He befriends everyone he meets and maintains cordial relationships with all his colleagues. The youth icon tries to stay away from controversies. He was romantically linked to another YouTube personality Carson Fanikos and celebrity singer-songwriter Taylor Swift. But Damon termed the link-ups to be mere rumors.

Though a vegan, Damon Fizzy is a food lover, and his favorite food is pasta. He is a staunch supporter of animal rights. Damon loves to call his fans the Fizzy Family and his favorite color is blue. Damon Fizzy is the prime example of positivity and is a role model to many. He has over 265,000+ subscribers on his YouTube channel.