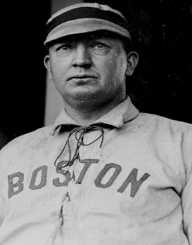 Cy Young was an American baseball player who is best known for his numerous pitching records in Major League Baseball.

Young was born on 29 March 1867 in Gilmore, Ohio as Denton True Young. His parents were McKinzie Young and Nancy Mottmiller. Young also had four siblings, Jesse, Alonzo, Ella, and Anthony. Young only attended school up until the sixth grade; he dropped out so he could help on the family farm. Young played amateur baseball for some teams in some leagues. The oldest scorecard to feature his name comes from the 1888 season. The next season Young got offered a place in the minor leagues playing for Canton.

The Canton team were Young’s first team in professional baseball. Young’s fastball pitches earned him the nickname, cyclone which was shortened to Cy. Young played thirty games for Canton, winning fifteen games and losing fifteen games. After one season he was signed by the Cleveland Spiders, a major league team. Young won his debut game for the Spiders, pitching a three-hit 8-1. While at the Spiders Young developed a partnership with a catcher, Chief Zimmer, it is estimated that no catcher caught more pitches from a pitcher in baseball history. Zimmer had to pad his glove with steak to protect his hand from Young’s fastball. Within weeks of playing his first game for the Spiders, Young was the subject of a bid from the Chicago Colts. In 1892, Young led the league in shutouts and wins. The Spiders won the second half of the season but were swept by the Boston Beaneaters in the finals. In 1895, the Spiders reached the Temple Cup finals and faced off against the Baltimore Orioles. The Spiders emerged victorious by a margin of four games to one.

In 1897, Young pitched his first no-hitter against the Cincinnati Reds. Young was transferred, along with the rest of the Spiders star players, to St Louis Perfectos after the Cleveland Spiders owner bought the team. The Cleveland Spiders would go on to break the record for most losses in a season and fold the next year. In 1901, Young signed with the Boston Americans in the American League. Young proved a dominant force in his new league and led it in wins, strikeouts and earned run average, the triple crown of pitching. In the offseason, Young worked for Harvard University as their teams pitching coach. The modern World Series was held for the first time in 1903 and Young through the first pitch. The Boston Americans clinched the first World Series winning by five games to three.

In May 1904 Young pitched a perfect game against the Philadelphia Athletics. This was the first perfect game under the modern incarnation of the rules of baseball. Young also set numerous records that year including the longest streak of consecutive innings without giving up a hit, twenty-five. He also set a shutout streak which lasted forty-five innings. Despite being the oldest player in the league, Young posted the best ERA in the league in 1908. For the 1909 season, Young returned to Cleveland and pitched for the Cleveland Naps. His last career shutout came in 1911, against the Pittsburgh Pirates. Young retired at the end of the 1911 season.

Cy Young married his wife Robba, and the two stayed together until Robba’s death in 1933. From his retirement from baseball, Young returned to his farm and only briefly took charge of a minor league baseball team. Young died on 5 November 1955 in Peoli, Ohio.