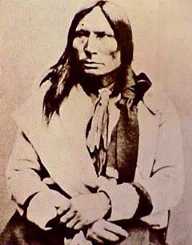 Crazy Horse is one of the Native Americans war heroes. Crazy Horse was born around the year 1840 in the present day Rapid City, South Dakota. Also, Crazy Horse was a native chief to the Oglala Sioux. Together with his tribe, Crazy Horse fought against the introduction for removal of reservations in the Black Hills. Also, to attain his goals, he partnered up with the Cheyenne forces to attack General George Crook in 1876. He later took part alongside Chief Sitting Bull to fight the battle of Little Bighorn. However, due to the overwhelming forces, Crazy Horse gave himself up to the white soldiers. Consequently, the soldiers killed him during a brawl he got into with some of the soldiers.

Many sources differ on the year of birth of Crazy Horse. However, the one that most historians seem to agree on is around 1840s. He was born to parents from different parts of the Lakota division. Crazy Horse’s father was from the Oglala while his mother was from Miniconjou. Crazy Horse got the name after his father. Amongst the trees to mean that he was at par with nature. Crazy’s mother died while he was still young. He was only four years at the time of his mother’s death.

Moreover, after Crazy Horse was old enough, his father gave him his name. Also, during the same ceremony, the father took a new name (Worm). Furthermore, in his early life, Crazy Horse took up the challenge of offering protection to his people.  Besides, his name was only given to him by his father, because he displayed his warrior talents. Crazy Horse had one of those statures that stood out amongst other boys in the community.


Expansion By The Whiteman

Just a few years after his birth, the setting of his home the Lakota started to change. The whites had set their eyes on their territory in search of precious metals and favorable settlements.  Therefore, this led to full completion for the barely available recourses. In turn, this led to a considerable amount of distrust and anger among the local people against the white men. Soon, later the invaders were setting up military station and forts all over the area. The safe Natives were no longer harmless.

The Whiteman had brought with him diseases that mostly affected the local population. Moreover, since the disorders were new to the natives, they did not know how to treat them. Therefore, this led to the loss of several innocent lives. So, slowly the tension grew to a point where only war was the best option for all involved. The natives wanted the white men out while the white men wanted to control the natives. Therefore, the year 1854 the natives killed the 30 white men who had encroached into their lands.

Some cow had lost its way and wandered into the camp of the Natives. Therefore, one of them slaughtered it and gave the meat to the people. The whites demanded an explanation. In confusion, one of them shot the local Chief Conquering Bear dead. This act escalated the situation into a full-blown war, and the white men died. The Grattan massacre lit the match on a very delicate situation. Thus, the war began with each side baying for the blood of the other.

After fighting in many different battles, Crazy Horse then took the fight to the Whiteman in the Battle of Little Bighorn. His home town was made into a reservation by the government. Therefore, Crazy Horse and his friend Chief Sitting Bull got together to oppose the move. Consequently, on June 17th, 1876 the two led a strong force of almost 1200 Oglala and Cheyenne fighters against General Crook. Knowing the terrain, they swept across the battlefield with ease. They beat the troops of General George Crook so easily making them turn away. Just after a week later, they also went for Lt. Col. George Armstrong dealing him one of the most significant blows at that time.

Crazy Horse met the love of his life Black Buffalo Woman, and they courted. However, she got married to another man No Water. So, due to his passion for Black Buffalo Woman, Crazy Horse convinced her to run away together. Consequently, No Water took a pistol and followed them. Crazy Horse got shot on the face leaving him with a significant scar on his face. All the madness did not deter the passion of Crazy Horse. He later found love again and married twice. Crazy married Black Shawl first and then later to Nellie Larrabee. However, Nellie Larrabee job was to provide information to the army against her husband. Moreover on the union between Crazy Horse and Black Shawl bore children. However, the daughter They Are Afraid of Her died while she was only three years of age.

The army did not take the defeat at the Battle of the Little Bighorn well. So, they sent in other troops to eradicate the locals. They deployed a scorch earth policy. However, Crazy Horse went ahead to fight regardless. Sometime during the winter of 1877, his men started to abandon him thereby weakening his army. Therefore, he decided to surrender to end the war on 6th May 1877. The soldiers took him to Fort Robinson. While he was there, he got into a brawl with some of the soldiers. One of the soldiers drove a bayonet into his kidney. He died on the 5th of September, 1877 with his father beside him from his wound.