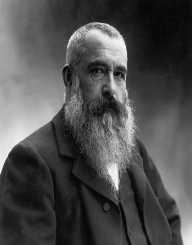 Oscar-Claude Monet was born on November 14, 1840, in Paris, France. His parents were both second-generation Parisians. The family moved to Le Havre in Normandy for his father’s work in grocery and ship-handling business. Monet didn’t want to follow his father’s career and chose to become an artist. He was supported by his mother, who was a singer.

Monet started attending Le Havre secondary school of arts in 1851. He took drawing lessons from Jacques-Francois Ochard and often drew charcoal caricatures that he sold for twenty francs. In 1856, Monet met Eugene Boudin, who became his mentor and taught Monet outdoor techniques. The following year, Monet suffered a personal loss. His mother died, and he had to leave school and go live with an aunt.

After his mother's death, Oscar-Claude Monet traveled to Paris to visit Louvre. He ended up staying in Paris for several years. At the time, a lot of artists were copying works from the old masters at the museum, but Monet decided to paint what he saw in nature. He met several young artists and quickly made friends.

In 1861, Monet was drafted to serve in the military in Algeria, for seven years. His father could have purchased his exemption but refused since Monet refused giving up painting. During his first year in service, Monet contracted typhoid fever. After this happened, his aunt intervened and tried to get him out of the army. Monet had to agree to complete a course at an art school if he would leave. In 1962, Monet became the student of Charles Gleyre. He and other young painters started working on a new approach to art, which later became known as Impressionism.

During this time, Camille Doncieux became the model of several Monet’s paintings, like The Woman in the Green Dress and Women in the Garden. In 1868, she became pregnant and gave birth to their child Jean. They married in 1870. The couple lived in poverty since Monet’s work was not at all recognized. Monet successfully presented his paintings at Le Havre, but creditors seized his silver medal and paintings.

In 1870, the Franco-Prussian War broke out, and Oscar-Claude Monet with his family took refuge in England. He studied works of landscape artists, which inspired Monet’s innovative color study. Still, his work was refused authorization to be included in the Royal Academy exhibition.

Monet moved to Zaandam in the Netherlands. Over there he was suspected of revolutionary activities and painted 25 paintings. Monet moved back to France in 1871 and lived in a small village Argenteuil until 1878. During this time, Monet painted some of his best-known works.

The first exhibition of Impressionist was held in 1974 in Paris. This event not only promoted the work of impressionists but also freed them from constraints of the Salon de Paris and let artists show their work without being judged. Oscar-Claude Monet presented four oil paintings and seven pastels. An estimated 3500 people attended the exhibition, and many works were sold. Still, some artists put too high prices on their work. Monet was asking 1000 francs for his Impression: Sunrise.

In 1876 Monet’s wife Camille became ill with tuberculosis. In 1878, she and Monet had their second child, which further weakened her poor health. The same year, she was diagnosed with uterine cancer and died in 1979. Camille was only 32 years old at the time. Her death was tough on Monet. He made a study in oils of his dead wife.

Although the first several months were hard on Oscar-Claude Monet, he started to produce his best work. Monet’s children went to live with Alice Hoschede, the wife of Monet’s friend, who became bankrupt and left to live in Belgium. She later moved to Paris and then to Poissy. Monet and his two children and Alice with her six moved to a house in Giverny and got married in 1892.

Oscar-Claude Monet focused on landscape and seascape paintings and wanted to document the French countryside. He began painting a series of the same scene, to capture the light changes of passing seasons. Monet’s paintings started to sell for higher prices, and he was able to buy a house with a large garden in Giverny. He projected the garden and gave daily instructions to the gardener for designs and layouts.

Oscar-Claude Monet's wife Alice died in 1911. Three years later, his oldest son Jean also died. Monet’s health was declining, and he started to develop cataracts. During World War I, Monet painted a series of weeping willow trees as a symbol for the fallen French soldiers.

Monet’s vision was affected by cataracts, and the paintings had a general red tone. He underwent surgery to remove cataracts in 1923. Afterwards, he was able to see specific wavelengths of light, which also affected his color choices. Monet died in 1926, after suffering from lung cancer. He died at the age of 86 and insisted on a small funeral ceremony therefore only about 50 people attended the ceremony.

The only heir to Monet’s belongings was his son Michel. He bequeathed his father’s home and garden to the French Academy of Fine Arts in 1966. The house and gardens were restored and opened for visitation in 1980.