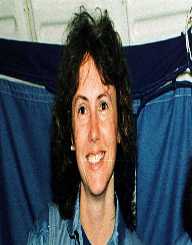 American teacher Christa McAuliffe was due to become the first civilian to go into space when she was caught up in the Space Shuttle Challenger disaster on the 28 January 1896. She was born Sharon Christa Corrigan on the 2 September 1948 in Boston, Massachusetts and had four siblings. From childhood, she was fascinated by the idea of space travel.

Christa McAuliffe graduated from Marian High School in Framingham, Massachusetts in 1966 and then enrolled as a student at Framingham State College. At college she did a B.A. degree in secondary education and American history, obtaining her degree in 1970. In 1978 she received her Master’s degree in education from Bowie State College, Maryland.

After her marriage to Steven McAuliffe, the couple moved to Washington D.C., and she began teaching English and history. She later taught at Concord High School, New Hampshire. She soon built up a reputation as an enthusiastic and favorite teacher.

In 1983 NASA decided to take a citizen observer on the space shuttle with the idea of drawing public attention to the work done and helping maintain public support for the funds required to keep space missions operating. President Reagan felt that sending a teacher into space would be a good idea and on the 27 August 1984; he announced the plan. The public response was overwhelmingly positive, and NASA received over 10,000 applicants.

McAuliffe was one of 114 selected from the initial applicants. The process involved a trip to Washington D.C. to be interviewed by a panel. Ten finalists were selected and subjected to space flight briefings, medical examinations and tests plus interviews at the Johnson Space Center in Houston. On the 19 July 1985, Vice President George Bush announced that Christa McAuliffe would be the first private citizen to travel into space. An elementary school teacher, Barbara Morgan was chosen as her back up. In September 1985, McAuliffe started her training for Mission STS-51-L.

The plan was that while in orbit McAuliffe would teach two fifteen minutes lessons which would be broadcast by PBS. The experiences were to be about technological advances attributed to the space programme as well as covering life inside the space shuttle, gravity, magnetism, and hydroponics.

McAuliffe was awarded the Congressional Space Medal of Honor.

At the time of her death, Christa McAuliffe was the wife of Steven McAuliffe and the mother of two children: Scott and Caroline. Her widower later remarried and became a federal court judge.