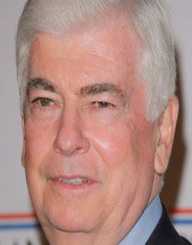 American politician Chris Dodd was born on the 27 May 1944 to Grace Murphy and Thomas Dodd in Willimantic, Connecticut. His father was a US Senator at this time of his birth. The family had six children: Chris, Martha, Carolyn, Thomas, Jeremy, and Nick.

After graduating from high school, Chris Dodd was a student at Providence College, where he obtained a BA in English Literature (1966). He returned to university in 1972, studying law at the University of Louisville.

Chris Dodd served in the Peace Corps for two years in the Dominican Republic, then served in the Army National Guard (1975-1969).

In 1974, Chris Dodd was elected to the US House of Representatives representing Connecticut’s Second Congressional District. He was elected to the United States Senate in 1980, making history by becoming the youngest person from Connecticut to be elected to the Senate at the age of 36.  He took the oath of office in 1981 and subsequently became a member of the Banking Committee, Foreign Relations Committee and the Health, Education, Labor, and Pensions Committee. Dodd served in the Senate for 30 years and announced his retirement in 2010 (1981-2011).

Chris Dodd launched his 2008 presidential campaign on the 11 January 2007 but withdrew from the race on the 1 January 2007 after finishing 6th place in the Iowa caucuses.

In March 2011, Chris Dodd was appointed as the CEO of the Motion Picture Association of America. He resigned in 2017.

Between 1970 and 1982, Chris Dodd was married to Susan Mooney. He married Jackie Marie Clegg in 1999. The couple has two daughters. Dodd was diagnosed with early-stage prostate cancer in 2009 and underwent a successful operation.