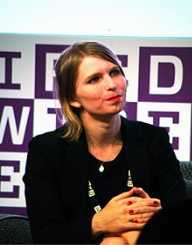 Chelsea Elizabeth Manning was born on December 17, 1987, in Crescent, Oklahoma, United States. She is a former United States Army soldier, activist, and politician. She was tried and convicted in July 2013 for delivering thousands of sensitive and confidential diplomatic information to WikiLeaks. She was sentenced to a seven year jail term between 2010 and 2017. She has also struggled with identity issues as a transgender and requested to be recognized as Chelsea and also undergo hormone replacement therapy.

Chelsea Manning joined the army and was sent on an assignment to Iraq in 2009 as an intelligence analyst. In her capacity, she had access to the diplomatic and military information which she later leaked to WikiLeaks in 2010. She was arrested in May 2010 after her friend and confidant informed the Criminal Investigation Command (CIC).

She pleaded guilty on July 30, 2013, on accounts of espionage and theft and sent to the maximum-security U.S. Disciplinary Barracks at Fort Leavenworth on a 35 year jail sentence. She was released from prison on May 17, 2017, after the U.S President Barack Obama commuted her sentence.

Chelsea Manning vied for the Democratic nomination for the Senate election of Maryland State in January 2018. She, however, lost the party’s nominations finishing second out of eight.

Chelsea Manning was born Bradley Edward Manning in Crescent, Oklahoma on December 17, 1987. She was the daughter and second born child of Brian Manning and Susan Fox. She grew up in a disintegrated family set up, broken by divorce and alcoholism. She was the subject of ridicule in school because of her transgender nature. She moved to live with her mother in Wales but could not cope with her mother’s unfortunate habits. After her completion of high school in 2005, she returned to the United States to live with her father who was remarried.

Chelsea Manning's father persuaded her to get enlisted in the army in which he hoped she would gain easy access to college education and also Ph.D. Following her father’s advice she was recruited for service in September 2007 and after training realized it was not what she expected. She was also exposed to adverse bullying in the army which affected her and wanted to be discharged. However, the move to secure her discharge was never granted, and she returned to camp for new training in January 2008. She graduated in April the same year and was posted at Fort Drum, New York in August. She was enlisted in the 2nd Brigade Combat Team which was later sent to Iraq.

The unit was deployed in Iraq in 2009, and Chelsea Manning was posted at Forward Operating Base Hammer which bordered Iran. Working as an intelligent analyst there, she was able to access classified information in the military databases. The information contained in the databases included videos and messages which were known as Iraq War Logs and Afghan War Logs. She copied the information to her personal computer which she gave to WikiLeaks in February 2010 while off-duty in Rockville, Maryland.

Upon her return to Iraq, Chelsea Manning confided to Adrian Lamo on May 20, 2010, who in turn handed the information to the army’s Defense Department. Manning was arrested in May the same year and arraigned before a court martial and charged with twenty two severe offences including espionage and theft.

The most dangerous offense was treason or aiding the enemy which would result in a death sentence. However, the court never found a reason to sign a death penalty. She was sentenced to a thirty five year jail term on August 21, 2013, and discharged from service.

Before her sentence, Chelsea Manning pleaded with the jury to allow her to be recognized as Chelsea Manning stating that she felt more female than male. The court granted her request for the change of name in April 2014 and also allowed her to undergo hormone therapy. Despite her attempts to acquire clemency in, her request was denied on April 14, 2014.

She again made a petition to the U.S President Barack Obama in November 2016 to make reductions in her 35-year jail term to be replaced by the six years he had already served. In early 2017, a total of 117,000 people had signed a petition for commutation. On January 17, 2017, she was granted commutation and was released on May 17 of the same year from Fort Leavenworth.

Chelsea Manning has received awards including ‘Whistleblowerpreis’ by the German Section of the International Association of Lawyers (2011), People's Choice Award  by Global Exchange (2012), Sean MacBride Peace Prize by the International Peace Bureau (2013), Sam Adams Award by Sam Adams Associates for Integrity in Intelligence (2014), EFF Pioneer Award (2017) and several other tributes.

After her prison life, Chelsea Manning has resorted to a quiet lifestyle and sent her gratitude to President Obama for commuting her sentence and setting her free. She ran for the Democratic nominations for the Senate elections of her hometown Maryland on January 18, 2018, but finished second on the June 26, 2018 election primaries out of eight democrat candidates. She is currently thirty years old and earns her income through public speaking and personal interviews.