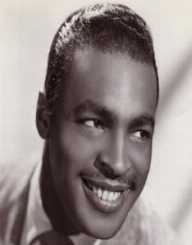 Tony Russell Brown was born 13th September 1922, in Texas City, Texas, in the United States. He loved music and learned piano from a young age.

Brown’s career began as a chemistry teacher at George Washington Carver High School in Texas. He then became a gas worker followed by an apprentice electrician, but in 1943, he moved to Los Angeles.

Brown soon became involved in the nightclub scene where black performers were appearing, with Nat King Cole being one of the best-known with his jazz piano. Brown was a member of the Three Blazers with Johnny Moore, and when Cole left the local scene in Los Angeles, the Three Blazers stepped up to take over the gap.

A record deal was signed with Exclusive Records, and in 1945, their song, Drifting Blues, was on the Billboard R&B chart for the staggering time of six months. Over the next two years, the band had several hits, including, New Orleans Blues, and More Than You Know.

Brown was at the forefront of nightclub scene on Central Avenue in Los Angeles and influenced other blues and jazz performers such as Cecil Gant and Ray Charles.

In 1948, Brown departed from the Three Blazers to form his own band with Eddie Williams on bass, and Charles Norris on guitar. He signed a recording contract with Aladdin Records, having his first hit almost immediately, called, Get Yourself Another Fool, closely followed by Trouble Blues which became one of his biggest hits.

He continued to produce a string of hits, and his last hit for that era was in 1952, called Hard Times.

As the music scene developed and rock and roll began to take over, Brown’s sound wasn’t what people were wanting, and his popularity began to decline.

He still worked and sang, and in the 1980s he sang at a New York City nightclub called Tramps for a season. Due to the appearances, Brown picked up a recording contract with Blue Side Records. He recorded One More for the Road a few days later before the record company closed.

Alligator Records took over the distribution of music from Blue Side Records. Brown once again entered a successful period. He was the opening act for Bonnie Raitt during the 1980s, and he began recording and performing again under the direction of a guitarist by the name of Danny Caron.

During his career, Brown released 65 singles, 30 albums, and 27 compilation albums. He is acknowledged as having a huge influence on music and, particularly, the blues, in the 1940s and 1950s.

Among his awards and honors, Brown has the following:

1997:   Recipient of the National Heritage Fellowship (Highest honor in the folk and traditional arts in the United States)