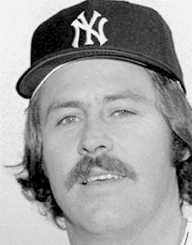 Catfish Hunter was born on April 8th, in 1946. Hunter earned his fame for his exceptional performance while playing in the Major League Baseball (MLB).

Catfish Hunter garnered immense fame by playing as a pitcher for Oakland Athletics, the New York Yankees, and the Kansas City Athletics teams. He retired from being a baseball player in 1979. Later, he was recognized by being listed under the National Baseball Hall of Fame.

James Augustus Hunter alias Catfish Hunter was born on April 8th, in 1946. He was born in a place called Hertford situated in North East Carolina. Hunter grew up from humble beginnings to become a notable baseball player in the Major League Baseball.

Hunter began playing baseball when he attended Perquimans County High School. Right from the beginning, he learned how to pitch from his elder brothers. Hunter continued honing his baseball skills, and with time he gained the attention of scouts from the MLB league.

In 1965, Catfish Hunter was given the nickname “Catfish” by Charles O. Finley. At the time, Finley thought it wise that the 19-year-old talented baseball player deserved a flashy nickname. Hunter was fortunate enough as he never got to play in any minor leagues during the beginning of his career.

As a major league player, he tasted his first triumph on July 27th, in 1965. Here, he was competing against the Boston Red Sox. The following year, he was part of those that were listed in the American League All-Star team. In 1967, he was again listed to the All-Star team.

Initially, Hunter did not play as a power pitcher. However, this changed as he honed his skill while playing for the Oakland A’s. In 1971, he enjoyed a successful season as his team won 21 games.

Following his exceptional performance during this season, he also went ahead and enjoyed a similar feat in the coming four seasons. Later, in 1974, Hunter was bestowed with the AL Cy Young Award. He earned his award after emerging victorious in league with 25 wins.

Afterward, Hunter went on to sign with the New York Yankees. This occurred immediately after he had been declared a ‘free agent’ in 1974.

He earned this status after the A’s failed to meet some terms that had been stipulated in his playing contract. Hunter’s five-year contract with the Yankees was valued at $3.35 million. This was the highest ever at the time which also earned him immense fame.

While playing for the Yankees, Catfish Hunter continued to perform well. During his first season with the team, he went home with 23 wins. The following year, in 1976, he won 17 games and was later listed as part of the All-Star team during that year.

Unfortunately, Hunter was affected by injuries that began occurring during the 1978 season. This greatly contributed to his decision to retire from baseball in 1979.

Catfish Hunter tied the knot with his wife called Helen in 1966. Together, they were blessed with three children.