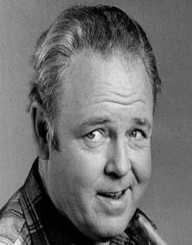 John Carroll O'Connor was born 2nd August 1924, to Edward and Elise O'Connor. He was born in New York City, in the United States. O'Connor's father was a solicitor, and he had two younger brothers who both become doctors.

He studied at Wake Forest University, but when World War II started, he transferred to the United States Merchant Marine Academy. After leaving the academy, he joined the Merchant Marines.

Carroll O'Connor resumed his schooling when the war finished. He enrolled at the University of Montana, and he met the woman who would become his wife, and that was Nancy Fields.

O'Connor left university and traveled to Ireland where he helped one of his younger brothers enroll in medical school. While he was there, he enrolled at the University College Dublin, where he finished his schooling. It was also there that he started acting.

His fiancé, Fields, left for Ireland to meet up with him once she had completed her studies.

In the 1950s, Carroll O'Connor started acting in stage productions in Dublin, and he then returned to New York and was able to secure stage work there as well.

The natural progression for O'Connor was to move into movie and television acting, which he did. Between 1956 and 2000, O'Connor acting in approximately 40 movies, and they were both feature movies and television movies.

He then debuted on television, and from 1960 to 2001 O'Connor appeared in approximately 40 television series, some with multiple episodes, including Gunsmoke, Bonanza, and The Man from U.N.C.L.E.

Carroll O'Connor had four starring roles on television, in long-running shows. His first breakthrough role was as Archie Bunker in All In The Family. The show started in 1971 and ran until 1979. Bunker was a grumpy, bigoted man, and the world loved him.

The show tackled all the hot news topics of the day, many of them politically incorrect. This show finished in 1979, and O'Connor then started in the follow-on show, Archie Bunker's Place. It ran for four years, until 1983.

In 1988, he starred in the crime show, In the Heat of the Night, and he was in the show until 1994. In 1989, O'Connor had open heart surgery and missed several episodes. An actor by the name of Joe Don Baker filled in as the acting police chief, so the show wasn't interrupted.

Carroll O'Connor also wrote, produced, and directed several series. He wrote Archie Bunker's Place and In the Heat of the Night amongst others.

In 1998, O'Connor had further surgery on his heart, to clear a blocked artery.

He died on 21st June 2001. O'Connor suffered from complications of diabetes which caused a heart attack.

1990:   Inducted into the Television Academy Hall of Fame
2000:   Awarded a star on the Hollywood Walk of Fame

In 1951 while they were over in Dublin, Carroll O'Connor married Nancy Fields. The couple adopted a son, Hugh, and he went into the acting profession with his father.

Sadly, O'Connor's son committed suicide in 1995. Hugh had struggled as a drug addict for many years.

After Hugh's death, O'Connor spent his time raising public awareness about the evils of drug addiction.

Carroll O'Connor and his wife donated one million dollars to the University of Montana in 1997. The university named a building after him which taught regional studies and housed a public policy institute.