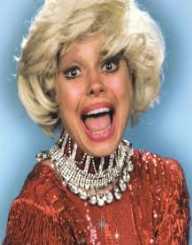 Carol Channing was born on January 31st, in 1921. She is famous for being an American actress, dancer, singer, and a comedian. She is best remembered for Broadway roles such as Gentlemen Prefer Blondes (1949), Hello, Dolly! (1964) among others. Throughout her successful acting career, Channing has been bestowed with some awards including three Tony Awards, Golden Globe Award, and an Oscar nomination.

Carol Elaine Channing AKA Carol Channing was born on January 31st, in 1921. Her place of birth was in Seattle, Washington. Channing is the only daughter to George Christian Channing and Adelaide.

Carol Channing first went to Aptos Junior High School before later joining Lowell High SchoolSan Francisco. She graduated from the latter school in 1938. When she clocked 16, she joined Bennington College situated in Vermont. Here, she pursued drama as her major.

Carol Channing first took to stage after being introduced by her mother who was working as a paper deliverer to theatre backstages. She debuted on stage while performing in the show called No for an Answer in 1941.

After this, she featured in Broadway production called Let's Face It! Her first award in the film industry came in 1948 after starring in Lend an Ear. She was bestowed with Theatre World Award for her exceptional performance.

In the early 1960s, Channing gained immense fame which contributed to her nomination for a Tony Award. Around this time, she was also a nominee for Best Actress in a Musical for the role she played in Show Girl.

A few years later, in 1964, Carol Channing became a household name following her lead role in Hello Dolly! She played the lead role of Dolly Levi. This role helped her bag home a Tony Award under the category of Best Actress in a Musical.

Other films soon followed including Thoroughly Modern Millie, The First Traveling Sales Lady, and Skidoo. Her role in Millie earned her a nomination spot for an Academy Award. Aside from this, she bagged home a Golden Globe under the category of Best Supporting Actress.

Throughout her life, Carol Channing has been married to four men. She first got married to Theodore Naidish in 1941. The two divorced in 1944. She again married Alexander Carson in 1953 before divorcing him in 1956.

Her third marriage was to Charles Lowe. The pair married in 1956 and divorced in 1999. Channing later wedded Harry Kullijian in 2003. Just like other previous marriages, this also ended in divorce in 2011.