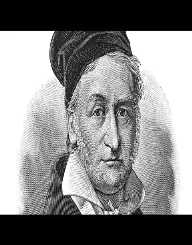 Carl F. Gauss was born on April 30, 1777, in Braunschweig, Duchy of Brunswick-Wolfenbüttel, in the Holy Roman Empire. He later went by his middle name, Carl F. Gauss, which is how is best known today.

Carl F. Gauss’s skill in mathematics was obvious, even when he was a small child. He advanced in the subject much faster than some of his other classmates. Carl F. Gauss went to public school for most of his early education, as his family was poor and could not afford to send him anywhere else. Luckily the Duke of Brunswick heard of Gauss’s talent, and sponsored him, paying for his education.

Carl F. Gauss’s first major school he attended was the Collegium Carolinum, which he began attending in 1792. In 1795, he left the school to instead attend the University of Gottingen. While at the university, he made several discoveries in mathematics, many of which lied in the field of geometry. He ended his education at the University of Gottingen in 1798. However, in 1799, Carl F. Gauss worked on his doctoral thesis. In this thesis, he noted that a polynomial (a function that uses more than one algebraic term) with complex coefficients (a constant multiplying number or value) had at least one complex root. This note would later be named the Fundamental Theorem of Algebra. It is still used today.

In the early 1800’s, Carl F. Gauss continued his research in mathematics, and he even began writing books on the topic. Also around this time, Carl F. Gauss began exploring interest in another subject: astronomy. What first caught his interest was the dwarf planet, Ceres. It was recently discovered around this time, but scientists were unsure of when it would reappear in the night sky. Using math, Gauss predicted when and where it would appear, and he was correct. This would go on to boost his interest and involvement in the subject of astronomy.

For the next decade, Carl F. Gauss researched in both the topics of mathematics and in astronomy. One of the great things he discovered would later be named after him, called the Gaussian Gravitational Constant. This is “The acceleration caused by the attraction of the sun at the mean distance of the earth from the sun.”

From 1818 to 1832, Carl F. Gauss surveyed the Kingdom of Hanover. To make the survey easier for him, he invented the heliotrope. This invention made it easier for him to measure positions of items, even when something was far away. Later in the 1830’s, he invented another device, the magnetometer, which could measure the Earth’s magnetic forces.

In 1845, he became a member of the Royal Institute of the Netherlands. After which, he spent most the rest of his career researching and writing.

Carl F. Gauss published his first book, Disquisitiones Arithmeticae, in 1801. After that, he published several more books, most of which concerning topics of mathematics and astronomy. Some of his most famous books are listed below.

Theory of the Combination of Observations Least Subject to Errors

Carl F. Gauss won several awards during his lifetime, mostly for his work with mathematics. His awards are listed below.

In 2006, centuries after his death, a mathematical award was named for him: The Carl Friedrich Gauss Prize for Applications of Mathematics.