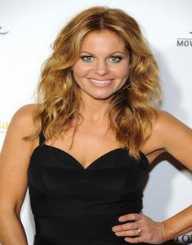 Candace Cameron Bure is an American actress and producer. Born on April 6, 1976, she is also an author and talk show panelist. Bure gained fame with her lead role as D.J. Tanner on Full House from 1987–1995. She later reprised the role as D. J. Tanner-Fuller on Fuller House. Bure began her acting career by appearing in television commercials. She subsequently appeared as Megan White in St. Elsewhere, 1982 – 1984.

Bure has appeared in several productions of Hallmark Channel including several Christmas films. Bure has appeared in numerous films and television productions including The Disney Sunday Movie, Make It or Break It Monster Mash, The Wager, and Faith of Our Fathers. In 2014, Bure place third in the season 18 of Dancing with the Stars. She served as co-host of the TV talk show The View from 2015 to 2016.

Just like his elder brother Kirk, Bure decided to venture into acting. She began with appearing in television commercials until 1982 when she guest starred in St. Elsewhere. She appeared in the series until 1984. Following that role, she appeared in T. J. Hooker, Punky Brewster, The Disney Sunday Movie, and Who’s the Boss?. She also appeared in the teen comedy Some Kind of Wonderful, 1987, as the youngest sister of Eric Stoltz.

Bure came into the limelight with her role as Donna Jo "D.J" Tanner, in the sitcom Full House, in 1987. The series ran until 1995. During the production of Full House, Bure also appeared in several made for television movies including I Saw What You Did, Growing Pains, and Camp Cucamonga. She also featured in No One Would Tell, Kidz in the Wood, She Cried No, and Boy Meets World. Her film works during this period include Punchline and Monster Mash. In 1990, she hosted the Nickelodeon Kids' Choice Awards alongside Full House co-star Dave Coulier and David Faustino. Bure hosted the show again in 1994, alongside Marc Weiner and Joey Lawrence.

Following the success of Full House, Bure played several film and television roles. Following the success of Full House, Bure appeared on Cybill and Boy Meets World. To give her enough time for her children, Bure went into a self-imposed hiatus. On her return, she joined Keshia Knight Pulliam to host 50 Cutest Child Stars: All Grown Up on the E! network. She then appeared on the sitcom That’s So Raven in 2007. She followed it with a role in The Wager alongside Randy Travis, and in Moonlight and Mistletoe with Tom Arnold. From 2009 to 2012, Bure featured in the series Make It or Break It.

Dancing with the Star and later works

Bure competed in the season 18 of Dancing with the Stars with professional partner Mark Ballas. However, she placed third behind Amy Purdy and Meryl Davis. In 2015, Bure reprised her in Full House but now as D.J. Tanner-Fuller in the Netflix spinoff Fuller House. That same year, she co-hosted ABC’s The View, season 19. The following year, she hosted the season 20 of the show. However, she announced leaving the show on December 8, 2016, to focus on Fuller House and Hallmark Channel projects.

Bure has authored four books. In January 2011, she released Reshaping It All: Motivation for Physical and Spiritual Fitness, which became New York Times bestseller. The rest are Balancing It All: My Story of Juggling Priorities and Purpose, 2014, Dancing Through Life: Steps of Courage and Conviction, 2015, and Kind is the New Classy: The Power of Living Graciously in 2018.

On June 22, 1996, Candace Cameron married Russian NHL hockey player Valeri Bure. The couple has three children. Bure is a Republican with conservative ideology. At the age of 12, she became a Christian. According to her, she developed bulimia nervosa in her early 20s.