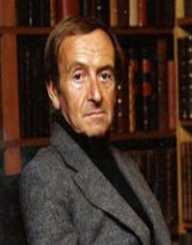 Brian Moore was an author from Northern Ireland.

Brian Moore was born in the city of Belfast, Northern Ireland, on August 25, 1921. His father, James, was a wealthy surgeon. His mother, Eileen, was a nurse. He had eight siblings. He studied at Saint Malachy’s College. He left without graduating.

Moore was part of the British Army during World War II. He was stationed around Europe and North Africa. After the war, he joined the United Nations Relief and Rehabilitation Administration.

Brian Moore moved to Canada in 1948. He became a reporter for the Montreal Gazette. He started publishing his novels in the early 1950s. Most of them were thrillers. They did not achieve much success. His first successful novel was Judith Hearne, published in 1955. It told the story of an alcoholic spinster. In 1958, he moved to the United States.

Moore wrote more than two dozen novels throughout his career. Most of them were thrillers or psychological novels. He often wrote about Ireland. He described the daily lives of Irish people, as well as the political and religious situation in the country. He was quite a diverse writer. Apart from the United States and the United Kingdom, his books were also popular in Germany.

Several of Brian Moore's novels received film adaptations. These included The Luck of Ginger Coffey, Black Robe, Intent to Kill, and others. The novel Catholics also received a stage adaptation. He wrote a few of the screenplays himself. He also wrote Hitchcock’s film Torn Curtain and the French-based film The Blood of Others.

Moore also wrote short stories, such as “The Sight,” “Uncle T,” “Hearts and Flowers,” and many others. He published them in different magazines. In 1978, he released the collection Two Stories.

In 1952, Brian Moore married Jackie Sirois, a French-Canadian journalist. They had a son named Michael. They got a divorce in 1967. Immediately after that, he married Jean Denny, a TV commentator.

Brian Moore passed away on January 11, 1999, in his house in Malibu. He did not manage to finish his last novel.

Brian Moore received a few awards, including the Governor General’s Award for Fiction and the Robert Kirsch Lifetime Achievement Award. He was also nominated for a few Booker Prizes. The Brian Moore Short Story Award is now given to outstanding Irish writers.