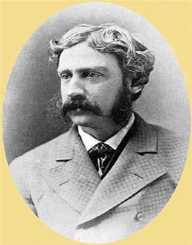 Francis Bret Harte was born on August 25, 1836, in Albany, New York. His father Bernard Hart was a merchant and became one of the founders of the New York Stock Exchange. During his childhood, Harte used to read a lot and also began to write. He was only 11 years old when he published his first work, a poem “Autumn Musings.” However, his interest in writing earned him not praise but ridicule. This shocked young Harte and he considered never writing again.

Bret Harte finished his formal schooling in 1849. In 1853, he moved to California and began working in several jobs. He used to work in mining and tried out to make a living from one of the gold camps in California. However, when it did not work out, Harte signed to the Wells Fargo & Co. and became their messenger.

Bret Harte earned his first recognition in 1860 when he reported to New York about the 1860 massacre of Wiyots in the Tuluwat village. He began working as the assistant editor of Northern Californian. When his boss Stephen G. Whipple was absent, Harte was in charge of the paper. After publishing the editorial on massacres, Harte received death threats and quit his job to move to San Francisco.

In 1857, Bret Harte published a poem in the newspaper The Golden Era and his prose piece A Trip Up the Coast. In 1860, he was hired by The Golden Era. During this time, Harte published several writings, like The Stolen Cigar-Cas and the parody Hemlock Jones. After receiving some recognition, Harte was recommended to James Thomas Fields, who was the editor of The Atlantic Monthly. Fields went on to publish Harte’s story in the newspaper. In 1864, Bret Harte and Charles Henry Webb started a literary journal The Californian. A couple of years later, he became the editor of The Overland Monthly and in 1868, published his story The Luck of a Roaring Camp. The story made Harte’s name recognizable all over the country.

Bret Harte’s big fame cane in 1870, when his poem Plain Language from Truthful James was published in Overland Monthly. The poem was then republished in several other large newspapers, including New York Evening, Saturday Evening Post and Boston Evening Transcript.

In 1871, Bret Harte and his family moved back to the East coast, to New York City to pursue his literary career. Harte eventually moved to Boston and got a contract with The Atlantic Monthly. His annual salary while there as $10 000, which was an unprecedented amount at the time. However, Harte’ popularity began to decline, and in 1872, he was without a job. The next five years were difficult for Harte since he failed to publish any of his works.

Bret Harte and his family were struggling with finances, especially during the winter of 1877 and 1878. After this winter, Harte accepted a position in the United States Consul in Krefeld, Germany.

In 1880, Bret Harte moved to Glasgow, and five years later, in 1885, he settled in London. During this time his wife and children were living in the United States, but Harte continued to provide them with financial support. However, Harte did not ask his family to come to Europe to live with him. Harte spent 24 years in Europe and continued to write throughout all these years.

Bret Harte married in 1862 to Anna Griswold. The marriage was rocky, mostly due to Harte’s jealousy. Bret Harte died in 1902 from throat cancer in Camberley, England. He and his wife were married for 40 years, until his death, however, spent only 16 of these years together.