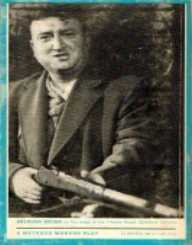 Brendan Francis Behan was a journalist, poet, a writer and a playwright. He was an Irish Republican activist.

Brendan Francis Aidan Behan was born on 9th February 1923, in Dublin at Holles Street Hospital. His parents were Stephen and Kathleen Behan, and he had two younger brothers:

Dominic and Brian. Kathleen had two sons from previous marriage. The siblings inherited literature interest from the father who was an ex-seminarian, then singing and political passion from their mother, and were fluent in Irish and English. Brendan was christened as Francis Behan.

Brendan Francis went to North William Street School until June 1934, where he went to St. Canice’s Christian Brothers School until 1937. Brendan went to Bolton Street Technical College, where he apprenticed with house- painting, sign writing and decorating, but was expelled soon.

Brendan Francis worked as a house painter with his father after leaving school in 1937. The family had moved to Crumlin after the death of his grandmother and landlord died, Brendan signed up to become a member of the Irish Republican Army in the youth organization:

Fianna Éireann when he was eight years old. He was the youngest contributor to magazines Fianna: The Voice of Young Ireland, and Irish Press. In 1931, eight- year old Brendan’s poem: Reply of Young Boy to Pro- English verses was published in the Irish press

In mid- 1939, sixteen-year-old Brendan Francis was finally a full-fledged member of the Irish Republican Army as a guerrilla fighter. He was given training as a Full Volunteer and learned how to make bombs in Killiney. In 1940, he made an unauthorized mission to bomb the Liverpool docks; it was known that the IRA did not sanction the mission.

On 7th of February, Brendan Francis was sentenced to three years in a Borstal Detention (reform school) in Hollesley Bay. He was deported back to Ireland on 1 November 1941.

Six months after his release, Brendan Francis was involved in a shooting incident, where a police officer was shot. He was arrested and tried for attempting murder of two Detectives of the Garda Síochána.

Brendan was given fourteen years jail sentence, which he served at Mountjoy Prison and the Curragh Camp. He was released in 1946 under a general amnesty for the IRA members in 1946. His activist days were over, but he returned briefly to jail for trying to break out an IRA friend out of Manchester jail the next year.

Brendan Francis started writing when he was serving time in Mountjoy Prison, he also perfected the Irish language and wrote short stories and prose in both English and Irish. His first play:

The Landlady was written around then. His works were published in Envoy (A Review of Literature and Art) and The Bell Irish literary magazine. After his release from jail, Brendan Francis lived in Paris.

He returned to Dublin in 1950 and began to write as a journalist and scripts for the radio. Brendan’s first play was broadcasted via the radio, entitled The Living Party. Brendan also sang on Ballad Maker’s Saturday Night.

The Quare Fellow was his first play that was produced in Dublin in 1954, Behan' based it on his time in prison. The Play was replicated in London during 1956, and in New York two years later. Gaining him a wider audience.

The Hostage premiered in 1958; it was a comedy play that included ballads and satires. It was an English adaptation of his Irish work An Gill. During the same year, he published Borstal Boy, a memoir about his time in Hollesley Bay in England. Brendan Francis was established as an Irish writer with the book.

After Brendan Francis alcoholism spiraled out of control, his later works, starting from Brendan Behan's Island to his last The Scarperer, were dictated into a tape recorder, as he was unable to finish them if he wrote them. Until his death, Brendan wrote six plays, seven books (one published posthumously) and one biography and a song.

In 1955, Brendan Behan married Beatrice ffrench-Salkeld, who also illustrated Hold Your Hour and Have Another. Their relationship was strained by 1962, due to his drinking problem and suspicions of an affair with Valerie Danby- Smith in New York. Their daughter, Blanaid, was born in 1963.

Brendan Francis drinking caused him to suffer from diabetes, frequently ending up in diabetic coma and seizures. Brendan collapsed at the Harbour Lights bar; he treated at the Meath Hospital in central Dublin. He passed away on 20 March 1964, aged 41. He was given an IRA guard of honor, and his funeral was one of the biggest.

Brendan Francis was buried in Glasnevin Cemetery, Dublin. A bronze head cast of him was stolen from the grave during 1978 and was replaced on the 50th anniversary of his death. Brendan’s grave is the second most visited grave in the cemetery, after that of Michael Collins.