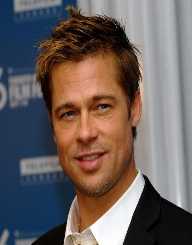 Brad Pitt was born December 18, 1963. He is an American actor. He displayed his love for acting since he was a child. He dropped out of college to pursue an acting career. His big break in showbiz was when he starred in the film ‘Legends of the Fall.’ He was the lead in the film, and his role made him popular and famous.

Brad Pitt has starred in movies such as ‘Seven,’ ‘Ocean’s Eleven,’ ‘Mr. and Mrs. Smith’ and ‘The Departed’ among so many other movies. His role in movies has earned a lot of awards over the years. He has been nominated for many awards, and he ended up winning so many of them. He has his own production house known as ‘Plan B Entertainment.’ He has also lent his voice to animated films such as ‘Sinbad.’

William Bradley Pitt ‘Brad Pitt’ was born on December 18, 1963, in Shawnee, Oklahoma. He was born to William Alvin Pitt who ran a trucking company and Jane Etta who was a school counselor. His family later moved to Springfield, Missouri. He has two young siblings, Douglas and Julie Neal. He attended Kickapoo High School for his secondary education.

Brad Pitt loved sports, so he participated in swimming, golf, and tennis. He also participated in the school’s musicals. After graduating from high school, he joined the University of Missouri in 1982. He majored in journalism. He dropped out of college to pursue an acting career before he graduated. He moved to Los Angeles to realize his dream of becoming an actor.

In 1987, Brad Pitt made his acting debut when he appeared in films like ‘No Man’s Land,’ ‘Less Than Zero’ and ‘No Way Out.’ In the same year, he also appeared in NBC’s sitcom ‘Another World’. In 1988, he played a role in the movie ’21 Jump Street’. After his appearance in ’21 Jump Street,’ he signed as a lead actor for the film ‘The Dark Side of the Sun.’ The film was however not completed, and he lost his role.

As the years went by he appeared in small time roles in movies such as ‘Happy Together,’ ‘Growing Pains’ and ‘Cutting Class’ among other movies. He was however recognized as a potential actor when he played the role J.D in the movie ‘Thelma and Louise.’ He went ahead to appear in the movie ‘A River Runs Through It’ which was accepted well by both critics and the general public.

In 1994, Brad Pitt was part of a cast in the movie ‘Interview with the Vampire.’ He was in the cast with other actors such as Antonio Banderas, Tom Cruise, Kirsten Dunst and Christian Slater. In the same year, he acted in the movie ‘Legends of the Fall.’ He acted alongside Henry Thomas, Aidan Quinn, and Juliette Binoche.

In 1995, Brad acted in the movie ‘Seven’ which was a hit at the box office. The movie earned a total of $327 million. In the same year, he starred in ’12 Monkeys’. In 1999, he acted in ‘Fight Club’ alongside Edward Norton and Helena Carter.

In 2001, Brad Pitt appeared in ‘The Mexican’ which was a romantic comedy and a box office success. He went ahead to act in the movie ‘Spy Game’ which grossed $143 million.  In the same year, he acted in ‘Ocean’s Eleven’ which was a hit at the box office and it grossed $450 million. In 2003, he lent his voice to animated movies such as ‘King of the Hill’ and ‘Sinbad: Legend of the Seven Seas.’

In 2004, he appeared in the film ‘Troy’ which forced him to train in sword fighting. In 2005, the comedy ‘Mr. and Mrs. Smith’ was released. Brad acted in the movie alongside Angelina Jolie. The movie went ahead to become one of the major films in the industry grossing $478 million.

In 2006, he acted in the movie ‘Babel’ alongside Cate Blanchett. Brad has a production company known as ‘Plan B Entertainment’. The production movie released the movie ‘The Departed’ in 2006. In 2007, he featured in the drama ‘The Assassination of Jesse James by the Coward Robert Ford’.

In 1995, Brad Pitt won the Golden Globe Award for the movie ‘12 Monkeys’. In 2007, he was awarded Volpi Cup Award for Best Actor in the movie ‘The Assassination of Jesse James by the Coward Robert Ford’ at the 64th Venice International Film Festival.

Brad Pitt dated some of his co-actresses during the 1990s. These women include Juliette Lewis, Robin Givens, Gwyneth Paltrow and Jill Schoelen. In 2000, he married actress Jennifer Aniston, and after five years they separated.

In 2014, he married actress Angelina Jolie, and in 2016 Angelina filed a divorce from Pitt. The couple has three biological children, Shiloh and twins, Knox and Vivienne. They also have three adopted children, Maddox, Pax and Zahara. He has founded an NGO known as the ‘Make It Right Foundation’ which provided rehabilitation for the victims of Hurricane Katrina. He has also founded the ‘Jolie-Pitt Foundation’ with Angelina Jolie.