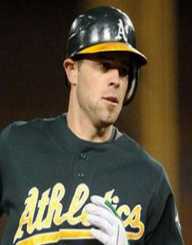 Robert Edward Crosby was born on January 12, 1980, in Lakewood, California. He is the son of Ed Crosby, also a baseball player.

Bobby Crosby was selected by the Anaheim Angles for Major League Baseball Draft in 1998. Crosby did not enter into any contract with Angles. He selected to play the college baseball for California State University, Long Beach.

Bobby Crosby joined the Oakland Athletics for Major League Baseball Draft in 2001. He assumed the duties of an infielder from Miguel Tejada, an MVP. Crosby achieved 22 HR and 64 RBIs. He achieved victory for American League rookies by hits (130), doubles (34) and walks (58). This performance deserved Crosby, Rookie of the Year. Bobby Crosby was the 6th athletic to achieve this distinction, apart from Harry Byrd, Jose Canseco, Mark McGwire, Walt Weiss, and Ben Grieve.

Crosby entered into a five-year contract with Oakland Athletics in 2005. The deal was worth 12.75 million. Crosby was assigned the utility infielder position.

Bobby Crosby entered into a contract with Pittsburgh Pirates as a free agent in 2009. He played 61 games. In 2010, Crosby along with two other players was exchanged for two players from Arizona Diamondbacks.

Crosby participated in 9 plays for Diamondbacks and got free from them in 2010.

Crosby entered into yet another contract with Milwaukee Brewers in 2013 but was let free for poor performance.

Bobby Crosby has two siblings, one elder and one younger. His younger brother Blake Crosby is also a baseball player. He has been playing for 2009 Major League Baseball Draft and was presently assigned the duties of Regional Crosschecker for Toronto Blue Jays in Chandler, Arizona. His elder brother, Brian Crosby is an artist for Walt Disney Imagineering.