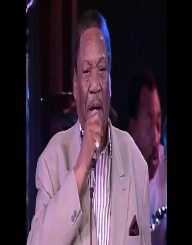 Bobby "Blue" Bland was born 27th January 1930. He was born in Barretville, Tennessee, in the United States. Just after his Bland’s birth, his father deserted the family. His new stepfather was called Leroy Bland, and it was from him that Bland started using that name.

Bland only received a third-grade education, dropping out to work in the cotton fields. He never returned to school.

In 1947, he moved to Memphis with his mother. He began singing gospel and soon found himself hanging around in the artistic district of Beale Street with aspiring musicians such as B.B. King.

In the early 1950s, Bland recorded but didn’t find success. He then served in the U.S. Army for two years, and during that period he performed in a band.

When he returned to Memphis in 1954, the other aspiring musicians he had previously hung out with, had their careers well underway. One, in particular, Johnny Ace, was doing very well with Duke Records, and Bland joined him.

Don Robey was running Duke Records. He took advantage of Bland's limited education and helped him sign a new contract. Whilst the industry standard was for artists to earn two cents per record sale, Bland’s contract only saw him get half a cent per record sale.

In 1955, Bland released his first single. The following year he began touring in a show called Bobby "Blue" Bland Consolidated. With the other musicians, Bland began to shape the musical style for which he was to become famous.

In 1957, Bland had his first success in the charts. His single, Farther Up the Road, went to number one on the R&B Chart, and number 43 on the Billboard Hot 100. He followed up with several more hits over the next five years.

1963 saw his last number one hit, called, That’s the Way Love Is. Despite this, he continued to have chart success in the R&B Chart through the 1960s.

In 1968, Bland's group disbanded due to financial constraints. Bland suffered from depression and turned to alcohol, but in 1971 he stopped drinking and turned his life around.

Duke Records sold out to ABC Records, and when this happened Bland went back to the studios, and several successful albums were recorded and released.

His first single under the new record company, This Time I’m Gone for Good, made top ten in the R&B Chart and saw him make the top 50 in the pop charts. Bland continued to do well in the charts through the 1970s.

In 1985, Bland changed record companies. He signed a contract with Malaco Records who specialized in Southern black music. He recorded several albums with them and toured with B.B. King.

From 1961 to 2003, Bland released 27 albums, three live albums, and appeared on ten compilation albums. He released almost 100 singles during his career.

Bland's style of music was a mixture of gospel, blues, and R&B.

Bland married Willie Martin Bland, although the date of their marriage is unknown. They were still together at the time of his death in 2013.