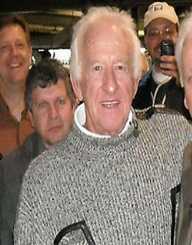 His father had played soccer in Switzerland before immigrating and was a tool and die maker by trade. As a boy, Uecker used to spend time at Borchert Field, watching the minor-league Milwaukee Brewers.

When attending a technical high school in Milwaukee, Robert George Uecker played basketball and baseball. He made the school baseball team and became a catcher. Uecker dropped out of high school.

Bob Uecker joined the U.S. Army when he was twenty years of age (1954) where he played military baseball with soldiers who had played either in the college of the minors. During that time he played at Fort Leonard Wood, Missouri as well as Fort Belvoir, Virginia. After his army service ended, Uecker signed with the Milwaukee Braves (1956), and in 1962, became a catcher in Major League Baseball with the Braves.

He went on to play for the St. Louis Cardinals as well as the Philadephia Phillies, returning to the Braves when they were based in Atlanta, Georgia. He retired from Major League Baseball in 1967. He finished his professional career with a batting average of 200 and a fielding percentage of .981.

After retiring from playing professional baseball, Bob Uecker worked as a public-relations ambassador for the Braves. Around this time, he also appeared on the Johnny Carson Tonight Show where the host of the show referred to him as Mr. Baseball. In September 1971, the Brewers announced the Uecker would broadcast games on radio and television.

During the 1970s and 1980s, Bob Uecker co-hosted some television shows including Battle of the Network Stars, ABC’s The Superstars and Bob Uecker’s Wacky World of Sports.

He was offered a role in the television series Mr. Belvedere (1985-1990) and appeared in the comedy Major League (1989) alongside Tom Berenger. He was also in the two sequels to Major League.

Bob Uecker was added to the National Radio Hall of Fame in 2001 and 2003, was presented with the Ford C. Frick Award by the National Baseball Hall of Fame for his broadcasting of the game. In 2006, to mark Uecker’s 50th year in professional baseball, the Brewers placed a number 50 in their Ring of Honour. The Brewers also added Uecker’s name to the Braves Wall of Honor at Mill Park in 2009.

Uecker was also inducted into the WWE Wrestling Federation’s Hall of Fame. The wrestling acknowledgment was for his participation in Wrestlemania III and IV during the 1980s.