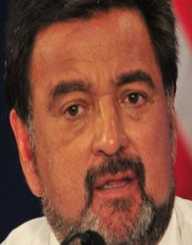 Bill Richardson did his early schooling in México City until 1960 when he was sent to boarding school in Massachusetts. He then enrolled at Tufts University and was awarded a B.A. (1970). He did further studies at Tufts University Fletcher School of Law and Diplomacy and obtained an M.A. (1971).

In 2007, Bill Richardson filed a statement of candidacy with the Federal Election Commission about running for president. The same year, he spent four days in April negotiating the release of the remains of six US troops missing since the Korean War (1950-1953). In May that year, at the Millennium Biltmore Hotel in Los Angeles, Richardson announced his candidacy for the Democratic presidential nomination. On the 10 January 2008, he dropped out of the 2008 presidential race.

In August 2008, he addressed the Democratic National Convention and on the 3 December 2008; President-elect Barack Obama announced that Bill Richardson was his choice for Secretary of Commerce. In January 2009, Richardson withdrew his nomination as secretary of commerce because of a pending federal investigation.

In December 2010, Bill Richardson made a four-day visit to North Korea with the mission of easing tensions in the region. The following year, he established the Richardson Centre for Global Engagement, a non-profit organisation focusing on promoting international peace. In January 2011,  Richardson was named Special Envoy for the Organisation of American States. That February, he was appointed Chairman of APCO Worldwide’s advisory service, Global Political Strategies.

He visited Cuba in September 2011, on a private mission to secure the release of American contractor Alan Gross from jail but was not successful. He travelled with Eric Schmidt, Chairman of Google, to North Korean on a humanitarian mission in 2013. Richardson was asked by the Ohio Governor to negotiate the release of college student Otto Warmbier in North Korea (2016). He spoke at the Eurasian Media Forum in Kazakhstan in 2017.

Bill Richardson is the author of three books. His memoir Between Worlds: The Making of an American Life (2005), Leading by Example: How We Can Inspire an Energy and Security Revolution (2007) and How to Sweet-Talk a Shark: Strategies and Stories from a Master Negotiator (2013).

Bill Richardson married Barbara Flavin in 1972. The couple has one child, a daughter Heather Blaine Richardson born in 1973 in Sante Fe, New México.