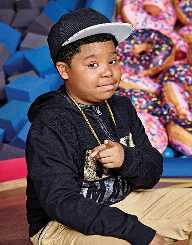 Benjamin Flores Jr. was born in Memphis, Tennessee, the United States on July 24, 2002. Flores is a young actor, dancer, singer and rapper aged 14 years with the nicknames Benjamin “Lil’ P-Nut” Flores Jr. Flores has been active since 2010 to date with some of his major works cutting across rap music and acting.

He is famously known for his rap music titled ‘You Might Be the One’ and his roles in films like ‘The Haunted Hathaways’ and ‘Game Shakers.’ Benjamin Flores Jr also featured in the animation ‘Happy Feet Two’ doing the background voice for Atticus.

Benjamin Flores Jr also known as Lil’ P-Nut was born on July 24, 2004, in Memphis, Tennessee. He began showcasing his talent from a tender age through rap music which his father supposed was rather unlike his son. However, the kid Flores was gaining fame, and many people were impressed by this upcoming young talent. His father was inclined to support Flores achieve his dreams, and he sent Flores to the ‘New Daisy Theatre Talent Show’ where Benjamin topped.

Beating all odds,Benjamin Flores Jr was now a young talent that many people wanted to associate with.  It is after this show that Marcus Shaw who would later become his agent endorsed him and also introduced him to Meda Leacock. Shaw and Meda were enthralled by this young rapper whose skills surpassed many other talented kids about his age.

Shaw exposed and marketed Benjamin through national broadcasting which also brought on board ‘The Ellen DeGeneres Show’ Producers. His first performance was before Ellen Producers who were impressed by his love rap song ‘You Might Be the One for Me.’ Thereafter, Flores was also got an appointment with the Cartoon Network producers who wanted him to take the role of Atticus in ‘Happy Feet Two.’ Atticus was a rapping penguin in the film and with Benjamin’s skill in rap a perfect match was created. Flores also featured in other films including ‘Are We There Yet,’ ‘The Haunted Hathaways,’ ‘The Thundermans,’ ‘Ride Along,’ ‘Santa Hunters,’ ‘Henry Danger’ and ‘One Crazy Cruise.’

Flores is one skillful rapper, actor, dancer and singer despite the fact that he is just 14 years old. Whenever Flores takes the stage, his audience always draws a sense of satisfaction from his performances that are well exhibited. Flores is a social child who would make everyone feel comfortable around him be it adults or fellow age mates. His music and acting personality has inspired many young people to pursue their dreams and talents and not shun away from trying.

Some of his age mates are left in awe at the level of maturity that Flores disposes. It is like he has a double personality as some would say while considering his composed yet outstanding demeanor. Flores would behave his age when it comes to normal social age set, but will also act like a 20-year-old when it comes to reasoning and being authentic.

His songs basically relate to the experiences many are going through in the current world set up, and that is what brings out the uniqueness. Flores has a lot of followers on Twitter and has made many friends who compliment him on Facebook and other social media platforms. His YouTube posts have gained a lot of reviews which also makes Flores stand out.

Benjamin Flores Jr originally comes from Memphis where he was born, but at a tender age, his parents moved to Burbank, California. His dad had seen a potential in him which he wished would not be wasted in ignorance and decided to take Flores and his sister Melisa to California. California is also the region where the ‘Game Shakers’ are. His education life is rather not known, but it is clear that Flores and his sister are being tutored at home.