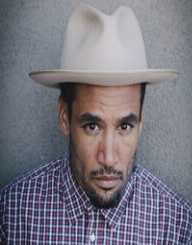 Ben Harper is an award-winning blues singer and songwriter. His style experimented in other genres.

Benjamin Chase Harper was born on October 28, 1969, in Pomona, California. His musical family influenced his love for singing and playing instruments.  He grew up in a mixed ethnic family including African-American, Cherokee, and Jewish ancestry. His parents divorced when he was five years old.  Young Harper taught himself how to play the guitar. It was a Bob Marley concert that influenced his desire to pursue music and express himself through it.

Ben Harper had his first gig when he was twelve years old covering the slide guitar style of American blues singer Robert Johnson. He later performed with blues musician Taj Mahal in Hawaii.

They toured, performed on television, and even produced an album together called Follow the Drinking Gourd. His LP “Pleasure and Pain” recorded with Tom Freund in 1992 led to his contract with Virgin Records.

Harper's 1994 debut solo album Welcome to the Cruel World was only the start of his music that expressed his sociopolitical awareness with songs such as “Like a King” and “I Rise.”

During this period, he was in his first concert on a large stage at the Rencontres Trans Musicales of Rennes, France. His next album in 1995 titled Fight for Your Mind went gold and spoke of experiences with racial prejudice while fusing genres such as folk, soul, alternative pop and classic rock.

It may have been difficult to categorize Ben Harper's albums because of their fusions and influences by some genres. The Will to Live in 1997 had a folk-centric focus with a rock while Burn to Shine in 1999 with the band The Innocent Criminals worked with blues, soul, rock, and folk. “Steal My Kisses” was one of the popular tracks on college radio. In 2003, Diamonds on the Inside showed a more spiritual side to Harper.

The 2004 album There Will Be a Light with Blind Boys of Alabama earned them the Grammy for Best Traditional Soul Gospel Album as well as Best Pop Instrumental Performance for “11th Commandment”. It was certified platinum in Australia, France, and New Zealand.

He also worked with other musicians such as Charlie Musselwhite and produced music with Natalie Maines from the Dixie Chicks. This 2013 album with Charlie Musselwhite titled Get Up! earned a Grammy for Best Blues Album. The two released another studio album in 2018 titled No Mercy in This Land.

Ben Harper is an avid skateboarder. He is the co-owner of the brand Roller Horror.

Ben Harper's social activism has extended well past his music. He was part of the 2004 “Vote for Change” concert tour to encourage people to vote in the presidential election.

Ben Harper recorded a music video with the No Nukes group in 2007 to come together against the expansion of nuclear power. In 2013 he helped Little Kids Rock to promote music education in disadvantaged public schools in the United States.

His acoustic benefit concert in San Francisco in December of 2016 supported New Light India for girls and women in Kalighat, India. He had participated in some benefit concerts and albums for multiple causes.