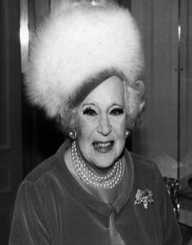 Dame Mary Barbara Hamilton Cartland was a prolific English novelist of the romance genre. Born on July 9, 1901, she became one of the 20th century most commercially successful writers taking advantage of the high demand for romantic novels at the time. Cartland published more than 700 novels, translated into 38 languages.

Cartland also published works under the penname Marcus Belfry and her married name Barbara McCorquodale. She also wrote plays, magazine articles, music, drama, and verse and reportedly sold more than 750 million copies of her books. She is referenced by Guinness Book of Records for the most novels published in a single year in 1983 and holds a record of one of the top-selling authors.

Cartland received education at The Alice Ottley School, continued at Malvern Girls’ College and later at Abbey House in Hampshire. After graduating, she worked as a society reporter at age 21 and a gossip columnist for Daily Express. Inspired by works of Elinor Glyn, she ventured into romance writing.

Barbara Cartland's romantic novels were set in the 19th-century Victorian era pure romance. Aside from her prolific writing skills, Cartland was also known for her fashion sense and beauty. Her first novel Jigsaw, 1923, became an instant success and a bestseller. In 1926, the Lord Chamberlain’s Office banned her play Blood Money. Like many other writers, Cartland faced accusations of plagiarism. Author Georgette Heyer accused her of the act after a reader drew his attention to Cartland’s use of his character names, dialogues and some plot points in her works.

Her work, A Hazard of Hearts, 1949, used characters of Heyer’s book Friday Child, 1944. That aside, for The Knave of Hearts, 1950, Heyer accused her of using many traits of his work These Old Shades. She is one of the top-selling authors in the world and referenced by the Guinness Book of Records for having released the most novels in 1983, publishing 23 novels that year. Cartland’s works are estimated at over 700, and she sold over a billion books.

After the death of her brothers in the World War II, Barbara Cartland took an interest in politics and other social works. She won elections a councillor on Hertfordshire County Council as a Conservative member. She served for nine years during which successfully campaigned for reforms in nursing homes, and the legalization of education for the children of Gypsies.

On April 23, 1927, Barbara Cartland married British Army officer Captain Alexander "Sachie" George McCorquodale. They had a daughter Raine McCorquodale, who Cartland later claimed was the daughter of George Sutherland-Leveson-Gower, 5th Duke of Sutherland. Cartland and McCorquodale divorced in 1933 accusing each other of infidelity.

Her second marriage was to Hugh McCorquodale, a cousin of his ex-husband in 1936. They had two sons, Ian McCorquodale and Glen McCorquodale. Hugh died in 1963. Cartland died in her sleep on May 21, 2000, at her home in Camfield Place. She was buried at her estate in Hatfield, Hertfordshire.