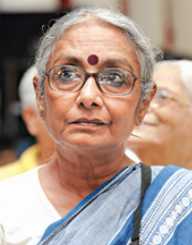 Aruna Roy is a political and social activist, and a social rights leader from India, and is the founder of Mazdoor Kisan Shakti Sangathana (MKSS). This a social workers organization, which is also one of the major civil rights movements in the country. Courtesy of its works, the right to information Act (RTI) was formed.

Before embarking on activist work, Roy was working with the Indian administrative services, which opened up her eyes to the corruption within the country. Also, she felt the need to help the poor in the society, since she discovered that government support alone is not enough. She then began extensive social activism in association with her husband, with her primary objective being to help the poor,

Aruna Roy was born on 26th June 1946, in Chennai. Her parents were Jayram and Hema, and she is the firstborn of the family. Her father worked as a lawyer and always had a strong social conscience, while her mother was a well-read woman. Her parents still emphasized to her concern for social matters and inspired her to become a freethinker.
Aruna was mostly brought up in Delhi and Convent of Jesus and Mary, a conservative that was operated mainly by the French. Aruna was there for about three years and then transferred to Bhartiya Vidya Bhavan, whereby she attained her Precollegiate education in full.

Also, Roy learned a lot of languages, for example, English, Hindi Tamil, and French, and became fluent in them. Roy however preferred English and studied the subject in college. She attended Indraprastha College, Delhi University whereby she pursued a postgraduate degree in the same. Following her completion, Roy became a tutor at the University for a year. However, she did not like the job, hence sat for Indian Administrative services examinations in 1967, so that she could become a civil servant.

Aruna Roy began work in 1968 as a civil servant in Indian administrative services. She first worked in Tamil Nadu but was later transferred to a more rural region called North Arcot. While there, she gained experience of the livelihood of people in a rural community and noticed the harsh circumstances that people in the rural areas face.

Aruna Roy was part of the few number of women that were members of the IAS. As a member, she was always obliged to prove and maintain her credibility. During her service, she faced challenges as a result of the red-tapism. However, the problems proved beneficial.

At around 1970, Aruna Roy began working as a sub-collector and collected revenues. More so, she was in charge of other departments and monitored their work. Roy was transferred to Delhi as the sub-divisional magistrate. In this position, she was in charge of more than six police stations and often dealt with cases relating to student unrest and elections. In her capacity, she realized the high levels of corruption in the government activities.

Aruna Roy was later appointed as a deputy secretary for finance. In 1973, Roy became a secretary serving in the office of lieutenant governor. At this time, Roy discovered the ugly side of the IAS that was contrary to her earlier expectations. Due to the high levels of corruption, she began planning for a different career. Hence, Roy quit her IAS job in 1974 amidst great opposition and criticisms from various relatives and friends. Roy then started working with the `Social work and research center’ a social organization that had been founded by her husband.

Roy worked with the SWRC in Tilonia, Rajasthan. While there, she worked continuously with the locals and associated with them always so that she could be able to understand their problems. Roy was content with her work and discovered that she was more useful to the people in her capacity than when she was a government worker. In association with some activists like Shankar Singh and Nikhil Dey, she founded the MazdoorKisan Shakti Sangathan (MKSS) in 1987.

The primary objective of the group was to tackle at least one major social issue per year. The movement grew and became one of the most influential civil rights organizations in India. It was always steadfast in the empowerment of workers. Also, it shunned corruption and promoted for transparent and honest activities from the government.

Aruna Roy got married to Bunker Roy in 1970. Bunker was her classmate in college and later became a social activist just like her. They devoted their time and efforts to social work and did not have any children together.