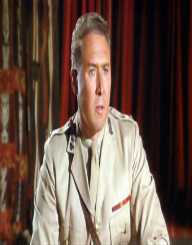 Sir Anthony Quayle was an English stage and film actor and director.

John Anthony Quayle was born in the town of Southport, England, on September 7, 1913. He was educated in private boarding schools. He attended the Rugby School, the Abberley Hall School and the Royal Academy of Dramatic Art. He became an officer in the British Army during World War II. He served in different parts of Europe. He also worked for the Special Operations Executive organization.

Anthony Quayle joined the Old Vic theatre in 1932. In 1936, he made his Broadway debut in the play The Country Wife. In 1948, he started directing plays at the Royal Shakespeare Theatre. He mostly focused on historical and classical work. He starred in Hamlet, Othello, Henry VIII, and others. He directed plays such as King Lear, The Clandestine Marriage, and Saint Joan. He also occasionally dealt with contemporary plays. He often travelled, performing his plays all over Europe and the United States. He created the Compass Theatre Company in 1985.

Quayle made his film debut in 1935. He had a small role in the drama Moscow Nights. He continued with many roles in both British and American productions. He starred in films such as The Wrong Man, Ice Cold in Alex, Lawrence of Arabia, and others. He mostly appeared in historical movies and costume dramas. Because of his military experience, he often played the roles of warriors, generals, and kings.

Anthony Quayle had small parts in the television shows Armchair Theatre and Strange Report. He also appeared in the miniseries Masada and The Bourne Identity. He narrated the documentary Reaching for the Skies and the miniseries The Six Wives of Henry VIII.

In 1952, Quayle received the title of Commander of the Order of the British Empire. In 1985, he was knighted for his contributions to the theatre.

From 1935 to 1941, Anthony Quayle was married to the actress Hermione Hannen. In 1947, he married the American actress Dorothy Hyson. They had a son named Christopher and daughters named Rosanna and Jenny.

Anthony Quayle had liver cancer. He died on October 20, 1989, in his home in Chelsea.