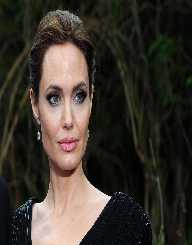 Angelina Jolie was born in Los Angeles, California on June 4, 1975. Her father John Voight and mother Marcheline Bertrand were both actors. Jolie’s parents separated a year after she was born and she and her brother lived with their mother. Her mother inspired her to become an actress. Jolie attended the Lee Strasberg Theatre Institute where she trained for two years. During this time, Jolie appeared on several stage productions.

Jolie’s mother had abandoned her acting career to raise children, and the family was living on limited income. Jolie attended Beverly Hills High School but felt isolated from other children from affluent families. She transferred to the alternative Moreno High School. During this time, Jolie turned to punk-style and was always dressing all in black and experimenting with knife play. She dropped her acting classes and aspired to become a funeral director. Jolie even took embalming classes. Jolie was often cutting herself to deal with her emotional issues. She also suffered from depression, insomnia and eating disorder.

When Angelina Jolie was 16, she wholly committed to acting, but she did not do well on her auditions. Her demeanor was often found too dark. Jolie appeared on several small projects and music videos. Her first movie projects were science-fiction film Cyborg, independent film Without Evidence, as well as her first Hollywood picture Hackers. At the time, one of her most successful roles was the 1996 film, Mojave Moon.

In 1997, Jolie won the Golden Globe award for her performance on TNT’s George Wallace. The film was critically acclaimed, and besides other awards, Jolie was also nominated for an Emmy. Her big breakthrough came in 1998 when she portrayed supermodel Gia Carangi in the movie Gia. The film chronicled the decline of the supermodel with her addiction to heroin and death from AIDS. For the second consecutive year, Jolie won the Golden Globe award. Gia was an emotionally hard role for Jolie, and she stopped acting for a while. She went to New York to study directing and screenwriting, but the success of her movie encouraged her to come back. Her following projects were most successful, and she was always critically acclaimed.

Jolie marked her name in Hollywood with her role as a mental patient in 1999 film Girl, Interrupted. Wynona Ryder played the lead role, but Jolie completely stole the spotlight with her performance. For the role, she won her third Golden Globe award. After the emotionally demanding role in Girl, Interrupted, Jolie took the role in the blockbuster Gone in 60 Seconds. This was her so far highest grossing project.

Although Jolie was already a 3-time Golden Globe winner, she was not yet well recognized. This changed when Jolie starred in the lead role in Lara Croft: Tomb Raider. She had to learn English accent and do massive martial arts training. Her hard work paid off since the movie made Jolie an international superstar and earned $274.7 million worldwide. In 2002, Jolie became Hollywood’s highest paid actress, earning $10-15 million per movie. Her success was followed by several more projects, including romantic drama Life or Something Like It and historical drama Alexander.

In 2005, Angelina Jolie starred opposite Brad Pitt in the action-comedy Mr. & Mrs. Smith. The film was a major box office hit, earning $478.2 million worldwide. Her performance in the documentary-style film A Mighty Heart was well received and earned her a Golden Globe nomination. By 2008, Jolie was paid $15-20 million per movie. She continued to be an appeal for box office success.

Jolie also starred in the successful films Beowulf (2007) and Wanted (2008). Although she was widely known as action-film star, Jolie showed her talent best in the 2008 movie Changeling. She portrayed a mother who is reunited with her missing son, only to find that he is an imposter. For the role, Jolie was nominated for the Academy Award.
Jolie has also been cast as the voice for several animation movies. She starred in the Kung Fu Panda franchise and Shark Tale. She also played the lead role in Disney’s Maleficent. Her latest roles as action star have been 2010’s Salt and The Tourist.

Besides her work as an actress, Jolie has also taken the part of directing. Her directorial debut was 2011 film In The Land of Blood and Honey, which takes place during the 1996 Bosnian War. Her next film was the 2014’s Unbroken- a story about World War II hero Lois Zamperini.

In 2001, after filming Lara Croft: Tomb Rider in Cambodia, Jolie became invested with United Nations High Commission for Refugees and started visiting several refugee camps. She made several donations to UN and was named the UNHCR Goodwill Ambassador. She has been on more than 40 field missions in 30 countries. In 2012, she was promoted as the Special Envoy to High Commissioner Antonio Guterres, which allows her to represent Guterres at a diplomatic level.

Jolie has also worked on several community development projects, as well as animal sanctuary development. Jolie is continuing to fight for immigrant children rights in the U.S. She has also fronted the campaign against sexual violence in military conflict zones.

When Angelina Jolie was 14 years old, she was in a serious relationship, which lasted for two years. She has said that the relationship was as emotionally intense as marriage. Jolie married her Hackers co-star Jonny Lee Miller in 1996. She attended the wedding by wearing a T-Shirt with his name written in her blood. The couple divorced in 1999. Before and during the marriage, Jolie also had a relationship with model-actress Jenny Shimizu.

Her second marriage was to Billy Bob Thornton in 2000, only after two months of dating. They announced the adoption of a child from Cambodia in 2002 but separated quickly after. Jolie went on to the adoption process and got her son Maddox.

Her next relationship was again well-publicized. In 2005 Jolie was accused of causing divorce of Hollywood’s most loved couple Jennifer Aniston and Brad Pitt. She dismissed the allegations of an affair. In 2006, the couple announced that they are expecting their first child. The couple only engaged in 2012 and got married in 2014. They have three biological and three adopted children. In September 2016, the couple separated.