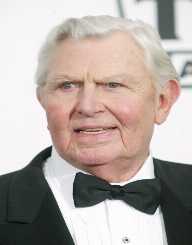 Andy Griffith was an American comedian, actor, writer, Southern gospel singer, and television producer. He was born on June 1, 1926. This meant he and his family lived through the Great Depression. Like most in the Greatest Generation, it shaped the way he saw the world. In the 1960’s, he was Andy Taylor in The Andy Griffith Show. This would be his most iconic role. Griffith passed away in July of 2012.

Andy Griffith was born in Mount Airy, North Carolina to Carl Lee and Geneva Griffith. Finances were tight from the beginning. Even though Griffith was an only child, he had to live with relatives until his parents could pay for a home of their own. While growing up, Griffith used humor to overcome poverty and shyness. Fortunately, his high school had a drama program he where he participated. Also, a Moravian minister by the name of Ed Mickey nurtured his love of music. When Griffith went to college, he intended to become a minister, like his mentor. Instead, Griffith graduated from the University of Carolina in 1949 with a degree in music. That decision would forever change his life.

After a three-year stint as a high school drama and music teacher, Andy Griffith made a name for himself in comedy. He was considered a monologist. His best-known monolog was called What it Was, Was Football. The story was about a simple country preacher trying to follow what was happening in a football game. It became so popular that Colonial Records recorded it in 1953. The single hit number nine in the 1954 charts. In 1955, Griffith made his Broadway debut in Ira Levin’s No Time for Sergeants. He was nominated for a Tony and won the Theatre World Award for 1956.

Griffith reprised the role in a movie version of the play. This is where he met Don Knotts, a man he would work with for many years. Griffith’s next and final Broadway role was in Destry Rides Again. This, too, earned him a Tony nomination. In 1957, he made his leading-man film debut in A Face in the Crowd. In 2005, Griffith was quoted as saying the film was more recognized in recent years than in the 1950s.

Andy Griffith settled into television as his medium of choice. From 1959 to 1960, he and Don Knotts were regulars on The Steve Allen Show. A guest appearance on the television show, Make Room for Daddy, landed Griffith his own show in 1960. The Andy Griffith Show ran from 1960 to 1968 and was Griffith’s most famous work. In the show, Griffith played a widowed sheriff and father to Opie, played by a young Ron Howard. It takes place in a town called Mayberry. While the town doesn’t really exist, the show was so popular that it never dipped down past number nine in the ratings.

Several reunions and spinoffs occurred after the show ended. Andy Griffith started Andy Griffith Enterprises in 1972. Through this company, he produced several television shows in the 1970s. In 1983, Griffith suffered from Guillain-Barré Syndrome. It took months of therapy for him to recover, but in 1986, Griffith made a return to television. Matlock ran from 1986 to 1995. It was a legal drama, featuring him as a Southern country lawyer who never lost a case. As was the case with The Andy Griffith Show, his ratings were high. Both shows earned a number of Emmy Awards, but Griffith never won one himself. In later years, he made appearances in television and motion pictures, but none had as much popular impact as his own television shows.

Andy Griffith never gave up his love of music. In several of his roles, he had the opportunity to sing. In fact, he released a country and gospel record while taping the Andy Griffith Show. In 1996, his gospel album, I Love to Tell the Story: 25 Timeless Hymns, was certified Platinum.

Andy Griffith was married three times in his life. His married his first wife, Barbara Bray Edwards, in 1949. The couple adopted two children: a boy, Andy Griffith, Jr., and a daughter, Dixie Griffith. They divorced in 1972. Andy Griffith, Jr. (later known by his middle name, Samuel), died in 1996 after a long battle with alcoholism. He married his second wife, Solica Cassuto, in 1979. His third wife was Cindi Knight. They were married in 1983 and remained married.

Apart from his encounter with Guillain-Barré Syndrome in 1983, Griffith had reasonably good health until his later years. Then, beginning in 2000, he started having issues. That was when he went through quadruple heart-bypass surgery. A few years later, in 2007, he had emergency hip replacement surgery after a fall. He died of a heart attack in 2012.