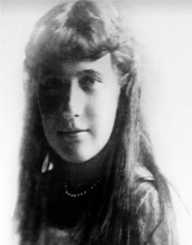 Anastasia Nikolaevna Romanova was born 18th June 1901 to Nicholas II of Russia, and Alexandra Feodorovna. She was born into the House of Holstein-Gottorp-Romanov. Her father, Tsar Nicholas II, was the last sovereign of Imperial Russia, and they lived in Saint Petersburg.

Anastasia Nikolaevna was initially a disappointment to her parents, as they wanted a son so there would be an heir to the throne. The four sisters shared bedrooms – the two older girls, Olga, and Tatiana, shared one room, and the two younger sisters, Anastasia, and Maria, shared another room.

Growing up to be mischievous, Anastasia Nikolaevna would often play tricks on her tutors and the other staff. She was a friendly, outgoing child, although quite sickly at times. This was also the same for her family, particularly her younger brother, Alexei. It was finally proven, in 2009, through DNA testing, that the children were carriers of the hemophilia gene, passed on by their mother.

Grigori Rasputin was a trusted advisor of Anastasia’s mother, Alexandra. Alexandra brought up Anastasia and her sisters to have complete trust in Rasputin, and to be able to share secrets and thoughts in confidence with him.

Although Rasputin’s relationship with the girls was innocent, one of their governesses tried to paint him in a tarnished light. She wanted him banned as he had seen the girls in their night attire. Their father, Nicholas, asked Rasputin to stay away from the nurseries.

The governess in question, Tyutcheva, was sacked from her position, but the damage was done. The family was scandalized. Tyutcheva spread lies and false information about Rasputin.

In 1910, yet another of the governesses laid charge that Rasputin had assaulted her. Her claim was investigated and found to be untrue, and she, too, was sacked from her position three years later.

Nasty rumors continued to circulate about Rasputin, and gossip continued to scandalize the royal family. Rasputin was ordered by Nicholas to leave Saint Petersburg, so he went to Palestine on a pilgrimage. Even so, the imperial family continued to have contact with him until his murder, in 1916.

Anastasia Nikolaevna and her sisters were very upset when they heard about Rasputin’s death. Her mother, Alexandra, attended his funeral.

When the bodies of the imperial family were discovered, the four girls were all wearing amulets showing a picture of Rasputin, and a prayer.

Anastasia Nikolaevna and her daughters attended to wounded soldiers during World War I, at one of the private hospitals. Anastasia and Maria were too young to be Red Cross nurses, so they would play games with the solders like checkers, and billiards, to try and lift their spirits.

There were many factors, long and short term, which led to the Russian Revolution in 1917. The people had lost faith in their Tsar, and anarchy and protests ensued.

In February that year, Anastasia Nikolaevna was placed under house arrest, along with the rest of her family. Nicholas II abdicated in March. After the Bolsheviks gained control of the majority of Russia, they moved the imperial family from Tsarskoye Selo, to the Ipatiev House at Yekaterinburg.

The Reds knew they were losing ground. They realized that Yekaterinburg would fall to the Whites. When the Whites arrived, the imperial family had disappeared. Items belonging to the family had been found thrown into a mine shaft, and due to this, it was accepted that the family had been murdered.The notes of Yurovsky, a Bolshevik soldier, gave account to his superiors of the family and their immediate servants being taken into the basement of the house. They were woken from sleep and told to dress as they were being moved in preparation of the fighting that would follow when the Whites arrived in town. When they were all in the basement, the soldiers opened fire, and killed them all.

There were conflicting reports, some saying that Anastasia Nikolaevna and Maria were not killed straight away as the bullets ricocheted off their corsets, so they were shot later. Another witness said they were bayoneted.

For years afterward, a conspiracy ensued that Anastasia Nikolaevna survived the evening. Many books and movies were made on the subject, and over ten women came forward at different times, claiming to be Anastasia.

Very sadly, Anastasia Nikolaevna was only a young woman of 16 when she was assassinated along with her entire family.