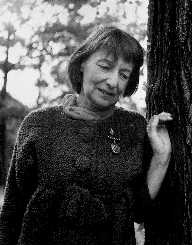 Amy Clampitt was born on June 15, 1920, in New Providence, Iowa. Her parents were Quakers, and Amy grew up in the three-hundred-acre farm, which belonged to her paternal grandfather. She was the oldest of five children in the family. They lived on the farm until Amy was ten years old when her parents bought a house.

Clampitt began to write poetry when she was nine years old. She studied at the American Academy of Arts and Letter and Grinnell College. After graduating, she mainly lived in New York, and to support herself, worked as a secretary at the Oxford University Press and as a reference librarian at the Audubon Society. Clampitt graduated with B.A. in English from Columbia University in 1941.

Clampitt was working several different jobs to support herself, in the meantime, attempted to write a novel. In 1952, she began working at the National Audubon Society, and in 1960 was promoted to freelance writer, researcher, and editor. She held the position until 1977. Clampitt was also a political activist and in 1971, participated in the demonstrations outside the White House to protest the bombing of North Vietnam.

Clampitt returned to writing poetry during the 1970s. She released her first book Multitudes, Multitudes in 1974, but it attracted little attention. She published a poem in The New Yorker in 1978. Her first, full-length collection The Kingfisher was released in 1983. This book was organized around four elements- water, earth, fire, and air. The book was a success and brought her immediate critical acclaim. From 1977 until 1982, Clampitt worked at the E.P. Dutton publishing house as an editor.

During 1980s, Clampitt published five more books, most famous of them What the Light Was Like in 1985, Archaic Figure in 1987 and Westward in 1990. Archaic Figure was influenced by her European travels and the ancient Greek myths. She also published a book of essays and some longer poems, printed privately. Clampitt’s last book, A Silence Opens, was published in 1994.

Amy Clampitt worked several different jobs during her life. She was a teacher at the College of William and Mary, Smith College and Amherst College. Many of her trips mostly influenced her work. Clampitt spent a lot of time in Manhattan and also traveled to Europe, former Soviet Union countries, Wales and England.

As the oldest child in the family, Amy Clampitt was a witness to her mother spending all her time and energy on raising her children. For this reason, she decided early on not ever to marry or have children.

For the last 25 years of her life, Clampitt shared an apartment on the Upper East Side with a professor at Columbia University Law School, Harold Korn. In 1994, the two were married, only three months before her death. Clampitt used a part of her MacArthur fellowship money to buy a house in Lenox, Massachusetts. She died in 1994 of ovarian cancer. Her husband died in 2010, and his estate established the Amy Clampitt Fund, which funds poet residencies at her house. After her death, in 1997, the book The Collected Poems of Amy Clampitt was released.