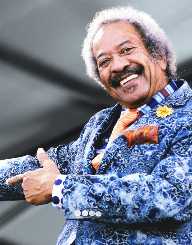 A familiar feeling of coziness and warmth fills one's heart when listening to the gems of one of New Orleans' most well-known musicians, the world-famous Allen Toussaint. Born on January 14, 1938, the late American composer, music producer and songwriter has left a bright mark in the world of music and inspired millions with his unforgettable performances.

His unique style, influenced by, Professor Longhair, a fellow citizen, built up into an exciting bouquet of classics that spread their magic over radio stations, stages and concert halls of their time and continue to summon a smile on the face of anyone who catches the distinct sounds of piano keys playing under Allen Toussaint’s fingers.

Allen Toussaint was born in a city which gave birth to not one or two other musical talents and famous names, New Orleans, in the not so music-associated neighborhood of  Gert Town. It was, in fact, his parents from whom he inherited his love of music, Naomi Neville, and Clarence Toussaint, with his mother being the more popular of the pair. One day they brought in a piano for Allen's sister so she could study the craft, but it was also a fateful day for Allen himself; he taught himself piano, and he played day on end at home.

His sister went on to take piano lessons, but he didn't do as well with her teacher. His first real piano teacher can be considered Professor (that is how piano players are called in New Orleans) Ernst Pinn, a neighbor. It was an exciting period for Allen, as his love for music grew, and his sophisticated soul could find are real mate in its sounds. He drew inspiration from Professor Longhair, a pioneer in piano music at the time of Allen Toussaint's early years.

Allen Toussaint kept learning at home until the age of 13 when he joined Snooks Eaglin, local a guitar player, and his R&B band, "The Flamingos." They toured high schools, bars, and clubs. Toussaint showed affection for classical music and New Orleans classics all the same. But he remained fonder of the modern trends and always added his personal touch to the classics he replayed.

When he was 17, his style brought pleasure to many club visitors, as he started touring on his own, and despite the racial prejudices of the time, he was loved by many, all owing to his music.

It was not until 1958 when the record company RCA issued Allen Toussaint’s first album, The Wild Sound of New Orleans, a collection of instrumentals. He would use different pseudonyms throughout his career, and for his first album he used “Tousan.” It was in this album that one of his most recognizable songs appeared, “Java,” which was later popularized by other musicians.

The Rise of a Star

More and more confident in his talent and expertise, Allen Toussaint joined Minit and Instant Records as a songwriter, writing for many local artists. His creations had varying success, with quite a few reaching heights on a national level. All his songs carried his personality, a profound and striking sound, yet with a touch of shyness and a gentle smile.

Even during his years of service for the US Army, between 1963 and 1965, he played with an army band, The Stokes, making hits covered by famous musicians. Having returned from service, by the end of the ’60s, Allen rose as one of the most popular, if not the most popular New Orleans music producers. Joining forces with the already-known Marshall Sehorn, they founded Sea-Saint Studio. The company saw many famous names and hits which excited America for decades to come and still stimulate the world today.

Allen Toussaint did not stop writing his music, though, in fact, his music producing career reached a height with perhaps his most known albums, Life Love and Faith and Southern Nights of 1972 and 1975 respectively. A high number of his songs were covered by other famous musicians of the time and never stopped breaking national charts. This period gave birth to still loved hits, hugely influential at the time: “Night People,” “Yes We Can” and especially “Get Out Of My Life, Woman.”

The ’70s saw Allen Toussaint settling for more domestic-oriented performances and basking in the fame he won with his music, and the following two decades he could enjoy a slower, more personal song life. Notable of that period was 1994 when he joined the so-called "New Orleans R&B dream team” with other famous names, such as Earl Palmer, Red Tyler, Lee Allen, Mac Rebennack, and Edward Frank. Together they recorded the Ultimate Session.

Of course, it never seemed that Allen Toussaint, with his gentle soul and love of his home, could ever leave New Orleans in search of happiness, or fame, or anything else in any other place. Nature, though, had a say in this with the destructive 2005 hurricane Katrina, which devastated Louisiana and wrecked Allen's house. He was forced to go up North, to New York, which he hailed as an opportunity.

Allen Toussaint used the change of pace and place to perform concerts and play for a not-homeland audience, but a nevertheless-grateful audience. This continued for eight years when he returned to New Orleans for good, which was the only logical step for him at the sunset of his life. He continued to sing and play for the world until his death in Madrid, Spain, on November 9, 2015.

Allen Toussaint's influence reached far beyond his home city and even beyond the borders of USA. He was loved for his modesty, privacy-loving nature and of course for his music which saw a mixture of upbeat hits, songs addressing social issues, personal songs, funny songs and melodies that whole generations remembered for a lifetime and still echo today. His death saw the music world lighten up by the supernova of a bright star that shined with refreshing light throughout its whole life.

He wrote songs which were sometimes claimed by others, but he never made a fuss or a scandal about it, perhaps owing to his humble nature and his attitude towards his art: it was not he that was important, it his music and how it pleased the audience. He brought an innovative touch to what was already being played and never stopped going further and further in the endeavor.

A beacon of light in the black music styles, and a pioneer in R&B, Allen Toussaint will always be mentioned when talking about music, New Orleans or piano is initiated. And that is recognition enough of his incredible talent.

It is hard to comprehend the number of gems Allen Toussaint produced, not only for himself but other musicians, too, but at least some of them would be: his breakthrough albums From A Whisper To A Scream, Motion, Life Love and Faith, Southern Nights; later albums such as Mr. Mardi Gras: I Love A Carnival Ball; love-by-all songs – “Night People”, “On Your Way Down”, ”The Fortune Teller”, “Victims of the Darkness”, and “Ruler of My Heart”. His warm, rather high voice always went the extra mile needed for his music to become an unforgettable experience.