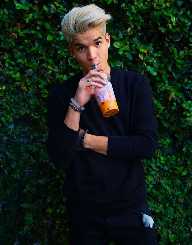 Alexander Burriss was born on March 28th, in 1990. He is one among the celebrated stars on YouTube. He has earned high acclaim through his YouTube channel called Wassabi Productions. Together with his buddy named Roi Fabito, they paired together and uploaded parodies of music videos to their channels. Wassabi Productions boasts of having more than 6 million subscribers. Burriss comedic talent began from the time he was in high school. During this time, he used to make the entire class laugh and as a result, was regarded as the class’s clown.

Alexander Burriss was born on March 28th, 1990. While studying in middle school, he crossed paths with Roi Fabito. The two lived in the same neighborhood. This was a major influence in settling for the same high school to study in. The two joined hands in 2005 after Fabito gave Burriss the idea of making videos and uploading them to the internet. Burriss showed interest in the idea and invested in it. This marked the birth of

After the YouTube platform was launched in 2006, the pair took advantage of this to upload the videos for their friends and family to enjoy. To their surprise, the vlogs got the attention of many. It did not take time before they were known all over.

To ensure that they brought in diverse ideas, they had to bring in new characters to their shows. Richard and Rolanda were their recruits in 2012. After this, they featured the parody of Call Me Maybe. This video was highly successful as it brought them more than 80 million views in two years. Following this huge success, their YouTube channel benefited as it got 6.4 million subscribers. Aside from this, it also got 2 billion views.

Alexander Burris’s birthplace was in Montana. Nonetheless, he was later brought up in Lexington, Kentucky. His other two brothers are also famous YouTubers. He also has a sister. Burriss dating life took to the public after dating Lauren Riihimaki who is also a YouTuber.