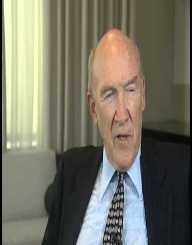 Alan K. Simpson came to prominence when he served in the United States Senate-Wyoming for over a decade. He got a chance to showcase his political skill for two terms. His works were visible even to the unknown. Hailing from a well-to-do family, Alan opted to follow his father’s footsteps who served as a governor and senator in Wyoming. He also joined the armed forces as an infantryman early in 19th-century.Before taking an oath as a senator, Alan took several jobs along the way including being an Assistant Majority Leader from 1965 to 1977.Aging gracefully, Simpson loves to indulge in humanitarian works. He has also authored several books including Right in the old Gazzo. Read on, to know more about his early and later achievements.

On 2nd-September 1931 an author, Pierre Huyskens was born. It was the same day, month and year that Alan Kooi Simpson was born in Denver, Colorado, United States. Alan’s father, Milward L. Simpson served as the 23rd Senator from Wyoming. His mother, Loona Kooi was a devoted homemaker. Alan completed his early studies at Cody High School and later at Cranbrook School in Michigan. Afterward, he studied Science at the University of Wyoming located in Laramie, Wyoming. It was there that he graduated in 1954.

For three years consecutively Alan worked in the army department as an infantryman. It was at the University of Wyoming that he majored in Law where he graduated in 1958.It was here that he joined the Wyoming Bar Association and he started to showcase his skills as a devoted lawyer. The same year he got a seat as an Assistant Attorney General for a year. For nine years he landed an official position as the City Attorney of Cody in Wyoming.

From 1964 to 1977 Alan teamed up with Wyoming House of Representatives. He also acted as the President of UW Alumni Association. In the mid of 1978, he served as a United States Senate from Wyoming. He remained in the position for two terms.

It was in the middle of 1981 and 1985 that Alan was appointed as the chairman of the Veterans’ Affairs Committee. For more than a decade, he helped A Republican leader, Bob Dole to organize or schedule his party’s meetings and events. When Republican Party got a seat in the government, Alan again got a chance to serve on the Veteran Affairs Committee for three years.

As a promising leader, he chaired organizations like Social Security Subcommittee and Committee on Aging. After retirement, Alan teamed up with Joan Shorenstein Centre where he served as a lecturer in 1990s.He was later chosen to govern the John F. Kennedy School of Government (Joan Shorenstein Centre) as the acting Director.

At the beginning of new millennium, Alan commenced with his major works. It was here that he started to serve as a lawyer in partnership with his two sons William and Colin. It was in 2001 that he was appointed as a representative of the American Battle Monuments Commission. He also led the Washington capital campaign where he collected over $200 million.

In 2002 Alan was appointed as the Co-Chairperson of Continuity of Government Commission. Besides, he still serves at the University of Wyoming as a lecturer.

It was during his tenure that Alan fully campaigned for equal rights no matter the gender or work ethics. He also advocated the rights of lesbian and gay natives to the point of supporting abortion. Various Institutions recognized Alan's notable work. He garnered several honorariums from Colorado College, Notre Dame University, and American University. In 2012 he was named as the Fifty Most Influential person by Bloomberg Markets. In 1954 Alan tied a nuptial knot with her longtime partner Susan Ann Schroll. The couple was blessed with three children: William, Susan, and Colin who served in the House of Representatives in Wyoming. As a trivia, Alan took a literary character in a movie called Dave in 1993.