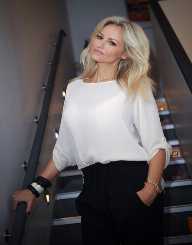 Adriana Karembeu was born on September 17th, 1971 in Brezno, Slovakia. She is a renowned actress and a fashion model. She has also been listed among the Guinness World Records for having the longest legs as compared to other female models.

Adriana Karembeu was born on September 17th, in 1971. She is the daughter of Zlatica and Miroslav. Her father, Miroslav worked as an engineer while her mother was a physician. Her sister’s name is Natalia Sklenarikova, and she is a professional lawyer. When Karembeu was still young, she had to be raised by her grandparents. This is for the reasons that her parents were still students at the time of her birth.

Adriana Karembeu went to study medicine at Medical Faculty of Charles University where she indulged in modeling for the first time. She won the local modeling competitions that she was involved in. This motivated her to take this career professionally. Later, in 1998, she was among the models that were involved in the Wonderbra campaign.
She has also been featured in films such as The Three Girls. This was in 2004 where she acted as a go-go dancer. A year later, she ventured into business and began her cosmetics business dubbed ‘SILICON +.’ She continued her modeling career, and she has modeled for Victoria's Secret in the United States.

Back on TV, in 1999, Adriana featured in Domenica In where she played the role of herself. She later featured in a 2007 TV film called Adriana etmoi. She was also playing the lead role in this TV film. In 2010, she was appointed to serve as the French Football Federation’s ambassador. This is a women’s football organization.

Adriana Karembeu began dating Mick Hucknall, an English singer in 1994. However, this relationship came to an end in 1997. The following year, she crossed paths with Christian Karembeu and fell head over heels for each other. The pair tied the knot later that year in December. Nonetheless, in 2011, Adriana went public with the news that they were divorcing each other. Three years later, she got married again to Aram Ohanian, an Armenian businessman. The two had been dating each other all along for three years. In all the affairs that Adriana has been through, she has not had the opportunity to have children.