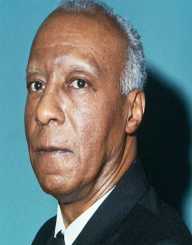 Asa Philip Randolph was born 15th April 1889, to Rev. James and Elizabeth Randolph. He was born in Crescent City, Florida, in the United States. His father was a minister as well as a tailor, and his mother was a seamstress.

The family moved to Jacksonville in Florida when Randolph was two years old. This was due to a large black community living in Jacksonville at the time.

Randolph learned life lessons from his parents. His mother taught him to get a good education and to defend his family, if necessary, using force. His father showed him that character and conduct were more important than a person's color.

Randolph and his brother excelled at school. They studied at Cookman Institute which was the only high school in Florida for African Americans. Randolph graduated in 1907.

Randolph lived in the south, which meant discrimination at work. As a black person, he could only apply for manual work.

In 1911, he moved to New York City. Randolph became friends with Chandler Owen and as a result, he learned about socialism. The two espoused that freedom was possible if one had a decent wage.

Randolph then developed his plan for civil rights activism. He believed in group action for black people so they could have economic equality. He opened an employment agency with Owen where they provided training for migrants. They also suggested that the workers take part in the union movement.

In 1917, Randolph and Owen established the Messenger, which was a radical socialist magazine that was published monthly. By 1919, there was infighting among the staff on various issues. As a result, before long, the magazine ran out of financial support.

In 1920 and 1922, Randolph tried to move into politics. His first attempt was as New York State Comptroller, and his second attempt was Secretary of State of New York. He ran as part of the Socialist Party, but he lost on both occasions.

Randolph's next union foray was to form the Brotherhood of Sleeping Car Porters. The members voted him in as President in 1925. Within the first year, over 50 percent of porters joined the union. As a result, the Pullman Company got violent and started firing workers.

He struggled over the next six years to keep the union going. Membership steadily declined as people thought it was ineffective.

In 1932, Franklin D. Roosevelt was elected President. In 1934, he amended the Railway Labor Act, giving rights to the porters. The union went from 658 members to over 7,000. The Pullman Company negotiated begrudgingly, but thanks to Randolph, his workers received a shorter work week. Most importantly, the porters received substantial pay increases, including the introduction of overtime pay.

Randolph became one of the most recognized people for African American civil rights.

He spoke loudly about civil rights and led many significant rallies. Randolph was instrumental in getting laws changed. This included the Fair Employment Act by President Franklin D. Roosevelt.

The civil rights movement under Randolph continued to gain momentum. He fought for several years to have discrimination finished in the military. In 1948, President Truman abolished racial segregation in the armed forces.

Randolph worked with Martin Luther King, Jr. in the 1950's. Most importantly, they worked on issues such as abolishing school integration in the southern states. Besides this, they also organized marches and rallies. Randolph also had King instructed in the art of organizing peaceful demonstrations. He then taught King how to build relationships with whites that were progressive in their thinking.

Among his awards and honors, Randolph has the following:

1964: Presidential Medal of Freedom by President Lyndon B. Johnson
1970: Humanist of the Year by the American Humanist Association
2014: Posthumously inducted into the Florida Civil Rights Hall of Fame

In 1913 Randolph married Lucille Campbell Green. She was a widow and university graduate, but most importantly, she had the same political vision as Randolph. Green supported them both while Randolph was politically active.