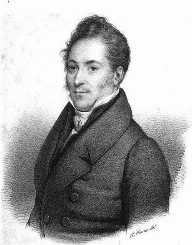 Évariste Galois was a French mathematician who was best known for his contributions to abstract algebra and the solving of centuries-old mathematical problems.

Galois was born in Bourg-l’Égalité (renamed Bourg-la-Rein in 1812) a suburb of Paris on 25 October 1811. His parents were Nicolas Galois and Adelaide-Marie Demante. His father was politically active and was a passionate Republican and member of the local liberal party. Despite his politics, Galois’ father, was made mayor of Bourg-la-Rein after the brief restoration of the Bourbon monarchy in 1814. Galois received his early education from his mother, who was well versed in classical literature and Latin. Young Galois was offered a place at the College of Reims, but his mother continued to homeschool him until 1823 when he began attending Lycée Louis-le-Grand. He performed well in his studies but was bored by them. It was at the age of fourteen that he discovered mathematics and became enthralled by the subject upon reading the Elements of Geometry. He began studying other advanced textbooks on algebra and math, while his other subjects suffered.

Évariste Galois attempted to enter the ÉcolePolytechnique, the French institution of mathematics, but a lack of prior formal education in mathematics saw him dismissed. He instead joined the ÉcoleNormale. His first paper to be published was in continued fractions. He continued to write papers and again tried to enter the ÉcolePolytechnique, this time it is popularly believed that he was rejected as his work was beyond the comprehension of his examiner. He completed his degree at the ÉcoleNormale. Galois would later be expelled from the Institute for his criticism of the director who had locked the gates of the school to prevent the students taking part in the 1830 July Revolution.

Galois then joined the Republican artillery unit of the National Guard. The unit was dissolved soon after Galois joined due to government fear over its strong political opinions. Galois was then arrested for raising a toast to the king with a dagger above his cup. He was quickly released, but the following year was again arrested for his part in a Bastille Day protest. He was sentenced to six months in prison for wearing the uniform of an illegal unit.

Galois’ death is shrouded in mystery. It is known that he died from injuries accrued in a duel. However, the cause of the duel and who his opponent remained a mystery. The night before the duel Galois wrote to his political allies and attached three mathematics papers to for his friend Auguste Chevalier. On 2 June 1832 Galois was shot in the abdomen during a duel, he was left in the field where the duel occurred by all those involved. He was found by a farmer and died of his wounds the following day. His funeral was planned by his political allies to be a launching pad for a revolution, but it was postponed following the death of famous figure Jean Lamarque.