Can Aries woman Taurus man be together mentally, emotionally and sexually? The Yin and Yang Aries woman and Taurus man compatibility make them a natural couple. While she keeps things exciting in and out of the bedroom, he helps to keep her grounded in reality. His patience matches her enthusiasm. Overall the Aries woman Taurus man relationship can be a balanced one provided they are ready to compromise.

In the Aries woman and Taurus man relationship, he is the one who is steady as a rock and is practical in all matters of the heart and mind. His Aries lover is a ball of fire. She is always on the go while he prefers to stay home, which some might see as a problem. Read more about Taurus man in love.

But the male Bull can be just as independent as the female Ram, allowing her the freedom to go off exploring once he trusts she will return home to him. And the Aries woman loves her men fiercely, so once she has entered into a committed relationship, she is loyal to the end. Read more about Aries compatibility and Taurus compatibility.

In fact, the Aries woman and Taurus man in love help to balance each other’s dominant personality trait. The Taurus man acts as a calming influence on the Aries woman, and she in return helps to bring him out of his shell. This allows the love relationship between the two star signs to continuously grow and thrive under nurturing conditions for both of them.

While the two zodiac signs may help to balance each other out, the Aries woman sexually definitely takes charge in the bedroom. The Taurus male sexually is a quiet lover so that she will initiate most of their sexual encounters. But once the passion between the Aries man Taurus woman in bed is sexually ignited, there is no looking back.

He will offer her slow, romantic gestures that melt her heart and make her seem like the only woman in the world. This reinforces the Aries woman’s need to feel special and be placed on a pedestal by her lover. Get more Aries dating and Taurus dating tips. 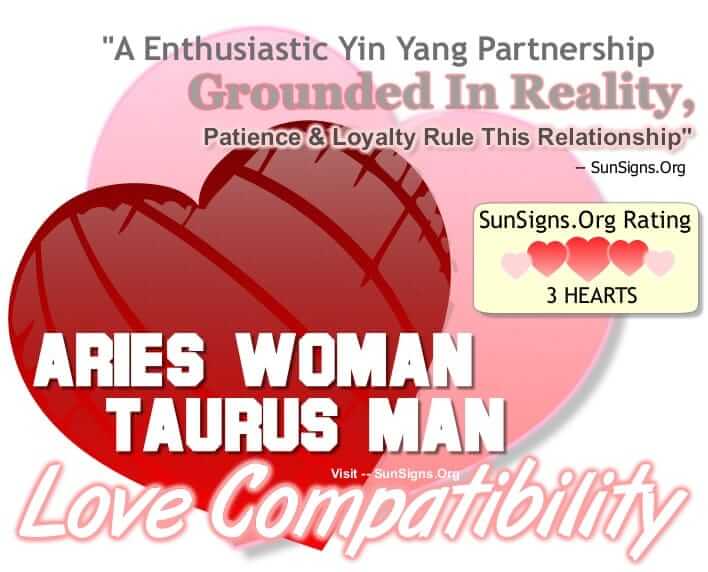 In an Aries woman Taurus man marriage,  the Taurus man is a pragmatic person, may not care to keep up with her need for sexual excitement. This will cause her to grow bored in the bedroom. And this is where tempers may flare, as the Aries lady is quick to anger, while the Taurus man remains quiet until he is pushed too far. That’s when he unleashes the rage of the bull that would quiet even the most furious of Aries woman in love and lead to a breakup.

It’s important for her to understand his need for stability, just as he must accept her desire for exciting lovemaking. But if the Aries woman and Taurus man soulmates can each learn the various qualities of both styles, they will continue to appreciate their love and what they bring to their relationship.

This appreciation extends outside of the bedroom as well. The Taurus men thrive on security and endurance, so their home is cozy and comfortable. This suits the Aries female just fine when she comes home, as long as her partner doesn’t mind seeing her all day.

The only sticking point in the Aries woman Taurus man love compatibility may occur whenever the Aries women make an impulsive decision that the male doesn’t agree with. His rational nature does not allow him to cast off this kind of irresponsible act lightly, and the arguments will be loud and potent.

When the Aries woman is dating the Taurus man, he will accuse her of being selfish and foolish, while she will defend her ability to do things for herself. A Taurean’s patience only goes so far, and if the Aries woman pushes him, he will show her the line he has drawn and the Aries woman Taurus man friendship will be finished.