Take this Japanese blood type test to analyze your personality. How can you improve your strengths for 2017? This personality test gives you a report into what kind of a person you are. It is very similar to how the common astrology works.

You will be shown your temperament. Are you nervous, hasty, angry, and prone to irritability? Your blood type personality report is deeper than your star signs as it is within your blood that you can see the prediction of how you best fit into all life circumstances.

Karl Landsteiner, an Austrian scientist, was the first person to have been given credit to discovering the different blood types in the year 1900. After that numerous articles and theories were written upon the subject.

Reports were given on the subject, but by the 1930’s this theory began to fade out. Too many people of power agreed that it was not scientific enough. However, it wasn’t until the 1970’s that this theory of blood type and personalities was revived again.

Masahiko Nomi wrote a book upon the subject and it quickly became popular. This influenced people to find out how different blood types held the same group of certain characteristics. Employers of large corporations in Japan began to divide their employees into different blood type groups in order to have the most chances of success in different area of the business. It proved very reliable. It became a common interview question when applying for a job, “What is your blood type?” 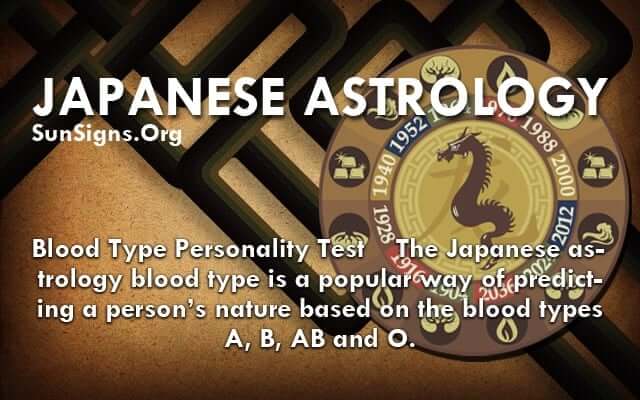 The horoscopes of western astrology have no mention of blood type, yet the Japanese have discovered that blood type is just as important if not more, than what you birth day or star sign is.

The blood type groups are given names to sum up what kind of person each blood type may represent the most. These are the names:

Discover yourself even further with this analysis of your blood type.