Saturn in the Eleventh House of the Natal Chart

What happens when Saturn is in 11th House? You have a unique personality which people might find difficult to understand.

While the unique personality of those in the eleventh house often serves them well, Saturn in astrology can cause some conflicting views. This restrictive influence can make you take too much pride in being different and prevent you from joining social groups or accepting new ideas. Always be aware of your motivations.

Saturn represents responsibilities, delays, commitments, restrictions, endurance, and discipline. You can get things done. But, you want to do it your way or else you feel something isn’t right.

This can cause problems, especially when people don’t understand your thought process (which is almost every time). You have to work hard and defend your theories in a way that people will agree with your assessment, rather than be turned off by your unorthodox methodology. 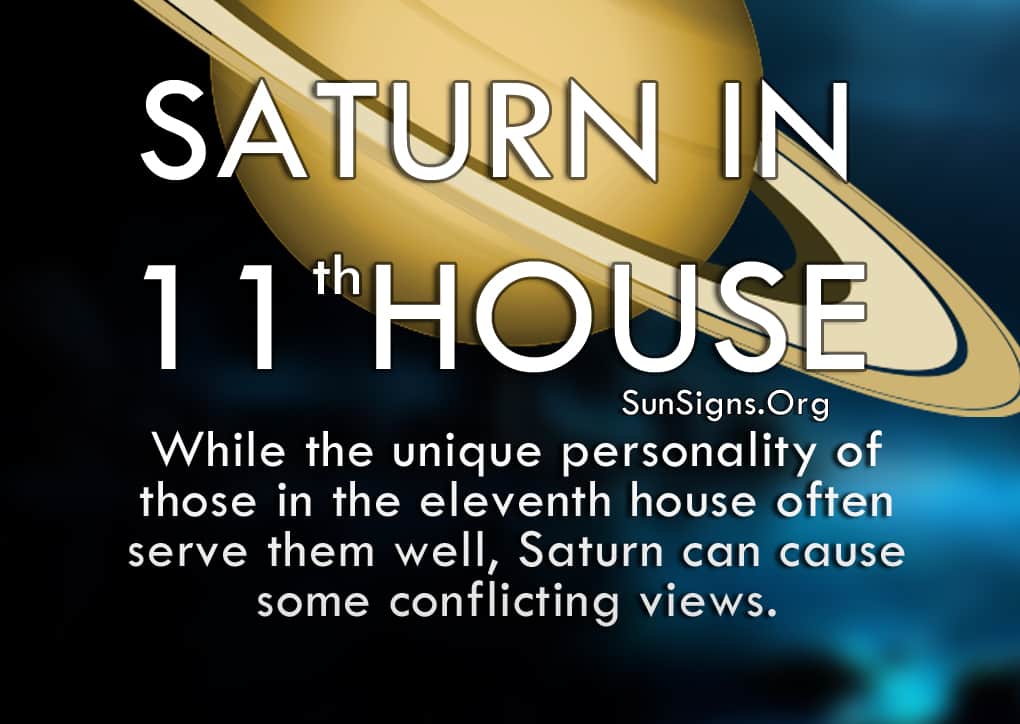 Because of this, you need a variety of relationships to keep yourself stimulated and working on new ideas. So you often struggle between becoming a permanent part of a group and doing it alone. The best thing you can do is develop a working relationship with a small group of people you trust. Create a close social circle for the rest of your relationships.

That way, you aren’t completely closed off from society while still being able to maintain your status. You have to compromise, which doesn’t have to be a dirty word. Sometimes that’s the best way to accomplish something that you have trouble bringing to fruition.

While Saturn in the eleventh house makes you want to shy away from things that are too ordinary or are widely accepted by society, you have to learn to judge things by their actual merit. Sometimes your fear of failure makes you automatically go against the grain to avoid joining a group or submitting to a particular idea. The only difficulty with this notion is that you need others to further your agenda.

Watch out for Saturn’s potential to prevent you from going after what you want. You have a fear of choosing one thing over another, including in your career, because you don’t want to be pigeon-holed into doing that one thing for the rest of your life. Once you make a choice, there tend to be assumptions and expectations that go along with that decision, and you want none of that.

But this can keep you from following your passion, leaving you to wander aimlessly with plenty of potentials but no real direction. Have the courage to know what you want and go after it with gusto.

Don’t let the possibility of failure hold you back from success. Saturn in 11th house personality have the intelligence and the stamina to follow their dreams. So don’t listen to anyone else’s assessment of what you should do.

At the same time, don’t let the interest of others affect your decisions either. Your need to be different can make you your own worst enemy. So, figure out the pros and cons before making a choice. You’ll be glad you did.