Libra Rising are some of the most charismatic of the zodiac. They are charming, funny, and over all pleasant to be around. People are just naturally drawn to them. It’s no shock that they are also some of the most social of the rising signs.

These are the ones with numerous friends, although often with more acquaintances than close friendships. People of the Libra ascendant sign have the image of the boy or girl next door. They are sweet and friendly – in public, that is. It’s only behind closed doors that this facade fades and they reveal their true selves. And in secret, they have the tendency to be competitive.


This ascendant can’t seem to decide on much else in life, either – whether it’s dinner or a career move. They are known for their indecisiveness. As the star sign of balance, they are constantly weighing their options, one vs. the other, pros vs. cons – so much so that they often don’t make any decision at all. This often makes them afraid of taking risks. 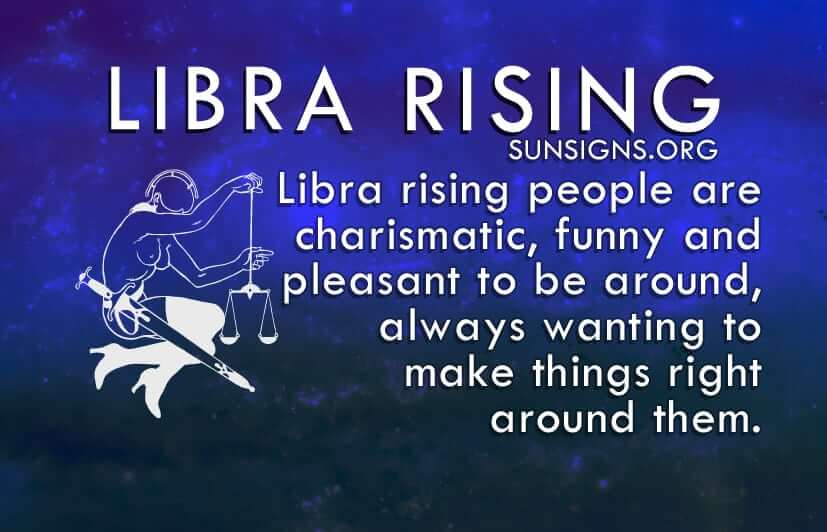 “But if I do this, then what about this? That might not be that bad or this might be good.” But Libra rising never comes to a concrete ruling. This can also lead to this zodiac sign’s lack of perseverance. They can lose faith in a decision rather easily, spending too much time questioning their previous conclusion.

This also extends to their image and style. They can easily be different things to different people, depending on which suits the situation best. Although, throughout all this is a pervasive attention to detail and appearance, no matter what it happens to be that day.

The Libra rising sign people have a thin and slender body frame. Most of them are beautiful and attractive. With a rounded face and sparkling white teeth, people can’t stop looking at you. Some of them might even have black curly hair.

Libra rising sign is also indicative of partnerships – both love compatibility and business. It’s almost as if this rising sign cannot be alone. They are almost always in a relationship. Sometimes more than one at once, because as a good Libra, they just can’t seem to decide.

In fact, this happens to make them rather dependent on their partner. They need a companion who can put their foot down when necessary. With the ascendant in Libra, they just can’t come to a conclusion in the relationship.

Yet among all of their indecisiveness, people with ascendant in Libra in their horoscope are looking for balance – they are the sign of the scales after all. They are looking for balance within their own lives and in others. Libra rising always wants to make things right. It’s not so much that they like to stick up for the little guy, because this can cause conflict, but it’s that they feel they have to.

Fairness is a cardinal quality of Libra ascendants. Yet, on the other hand, when things get a little too controversial, they shy away, easily dipping out of the spotlight as casually as they waltzed into it. This zodiac sign despises confrontation because it upsets the natural balance of things. And Libra is all about balance.

This is where Libra rising’s natural powers of persuasion come in. In order restore equilibrium, this star sign is very good at convincing others to either their viewpoint or simply the most harmonious. But in true Libra fashion, they don’t ever come on too strong, instead softly smoothing over any disagreements to achieve accord. After all, Venus is the ruling planet for Libra in astrology.

Its this quality that makes Librans excellent mediators. They can solve many disputes, smoothing over differences without alienating the opposing parties. And most likely making new friends in the process.