You are a Virgo if your birthday is between August 23rd and September 22nd. There is no better way to describe a Virgo man personality than to use the word “observant”. A Virgo man traits makes him notice everything, every tiny detail and small figure that other people will regularly miss.

The Virgo man traits show he may be seen as a bit of a perfectionist in many aspects of the word. He will regularly over-analyze various aspects of his life and the things that surround him.

Because of this zodiac trait is may take the Virgo men longer to accomplish tasks versus men from the other star signs. But when a Virgo guy does get something done you’ll be able to trust that he did an efficient and overall excellent job. 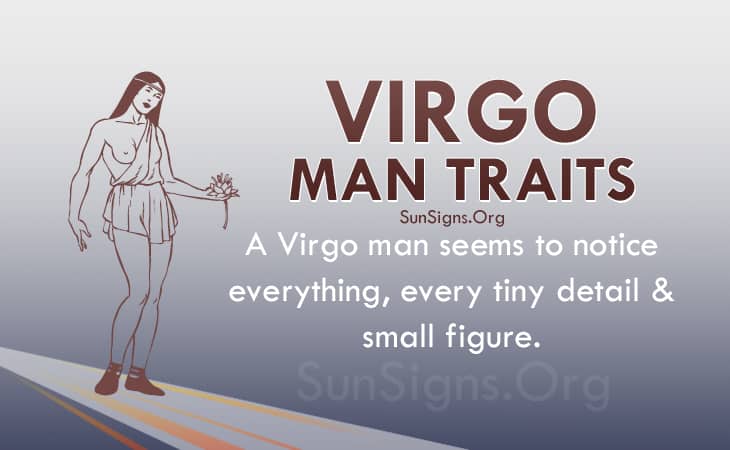 The Virgo male isn’t one to rush so he can get things done. He would rather do things slowly to make sure that he is not making mistakes. The Virgo man is also likely to look over his work several times before accepting that it is complete and right.

This Virgo personality trait that affects many school-aged Virgin boys. These are the boys that are more likely to spend their time working on a paper or studying rather than playing sports and joining entertaining extra curricular.

The Virgo man’s zodiac sign is symbolized by the virgin. This does not mean that he is likely to never marry and have children, but instead it represents a pure lifestyle.

The Virgo characteristics how that this man believes in fairness and honesty. If he sees someone else do wrong, he is likely to call them out on it. If something seems unfair he will not be afraid to speak up, even if it’s on someone else behalf. This could lead the Virgo man to be involved in politics and other social issues.

The Virgo guy also likes to stay busy. The Virgo star sign is partly dominated by Mercury, the planet that moves around the sun the fastest. This affects the Virgo man in a way that makes him want to keep moving. He is likely to work out regularly to stay healthy. But he is not very likely to join a competitive sport, even though he may enjoy watching them.

The Virgo personality traits also show that this Virgin man may will stay busy from dusk until dawn, as when he is doing something productive he feels the most fulfilled and happiest.

The Virgo man may stay busy with his job, housework, or mental puzzles. He doesn’t like to waste a minute, so it is unlikely that he will spend much time playing around to sitting on the sofa and watching television.

The Virgo man traits show he lives to understand, and because of this he may not spend all that much time socializing. A Virgo man would rather watch people and see how they act, rather than getting into the conversation.

One of the Virgo man’s flaws is his low confidence levels which prevents him from getting involved in many social situations.

If a Virgo man cannot overcome this flaw, then it is likely that he will miss out on several opportunities that could have given him a more fulfilling and successful life.

When it comes to romance, the Virgo man is likely to be shy at first. He will want to take things slow and let the relationship run its course. However, if things are going well and the Virgo man has found a partner who he can deeply trust and care for, then he will do whatever he can to make the relationship the best that it can be.

The Virgo man characteristics show he is likely to analyze every aspect of the relationship from the first date, the first time in bed, to ten years into his marriage.

This can annoy their partner at times, but they will learn to get used to it, and accept the Virgo man as he is. A relationship with a Virgo man is not likely to be exciting, but it will be loving and pure.