Feng Shui, which translates into wind water in English, is the Chinese art of arranging buildings and decorations in a way meant to harmonize people with their environment. This operates on the theory that living things have a life force, which is referred to in English as Qi. (Chi and Ki are all alternate English spellings of the same word). Feng Shui seeks to help maintain balance between people and their environments.

There are many different ways to seek to optimize your surroundings using Feng Shui. For example, many important buildings in China were designed so that they would face a certain way to maximize Feng Shui. Additionally, there are Feng Shui experts readily available (for a hefty price tag) to help you decorate your interior with Feng Shui principles in mind.

Often in China, Feng Shui was historically thought to be something only wealthy people could take advantage of. While most of us probably aren’t in a position to hire an architect with Feng Shui training or a Feng Shui specialist to re-decorate our homes, there are things that we can easily do to take advantage of some principles of Feng Shui without spending much money at all.

In Feng Shui, the main entrance area of your home is considered to be very important. It can be a source of positive or negative energy. For example, if you live in a neighborhood that is noisy negative energy can enter in the form of noises that disturb you coming through the front door. Maybe visitors who you find stressful enter through that door. Or, maybe when you look at the front door you think about the annoying neighbor across the street who has a messy yard or who is difficult to get along with.

Whatever the sources of negative energy, in Feng Shui there are a several different practices you can put into place to reduce the negative energy entering your home through the front door. For example, sometimes mirrors are placed to reflect negative energy back out to the street. Other times, door colors can be chosen. One popular method, that has been used for centuries, is the use of guardians. 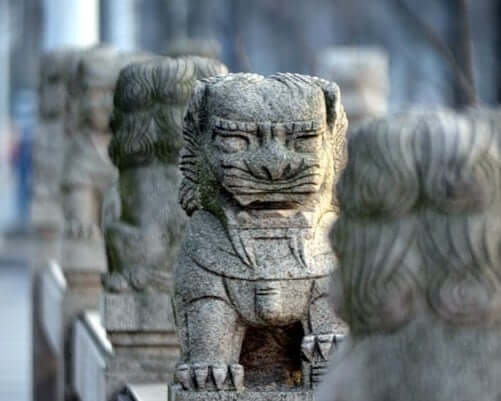 One common form of guardian used is often known as the Foo Dog or the Imperial Guardian Lion or Stone Temple Dogs in English (in Chinese these are just known as lions). This practice dates back to the Han Dynasty which ran from 206 B.C. to 220 A.D. Guardian lions were used some before that time, although, not necessarily the Foo Dogs we would see now. For example, the Iron Dog of Cangzhou, the largest and oldest known surviving iron cast artwork in China, was cast in 953 A.D.

You have probably seen these lions either outside of your favorite Chinese restaurant, in your local Chinese community, or in images of famous buildings in China. These lions often look somewhat doglike in nature, which may be because lions are not native to China and therefore the artists initially depicting lions during may have been relying on merely oral descriptions passed along from travelers and the artists’ imaginations. Therefore, many of the depictions look more like large dogs with manes than lions.

These guardians usually come in pairs. The male is generally depicted to have a ball under his paw – this symbolizes the world, and being in control of one’s domain. He represents yang and is believed to protect the building itself. The female is generally depicted with a puppy under her paw, which is meant to reflect the nurturing nature of the female. She represents yin and is believed to protect the people inside the building.

Often a pair of Foo Dogs will feature one with the mouth closed and the other with the mouth open, representing a balance of breath going both in and out. Traditionally, these guardians were used in the form of statues on either side of the entrance. However, you can buy smaller statues and place them in a prominent position near the entryway to your home for the same effect. You can also use Foo Dogs as a decorative element elsewhere in the house – for example as bookends or on top of your mantel. Make sure they are in a prominent place.

When you place these guardians, and are looking at their front, the female (with the pup) should be on the left and the male (with the globe or ball) should be on the right. If you prefer to go larger and use statues, Feng Shui practices would require that the size of the guardians be in the correct proportion to the size of the building, so the smaller the building, the smaller the guardians.

Foo Dogs are readily available over the internet made in a range of prices and sizes. Pick a pair that is aesthetically pleasing to you and in your price range. Whether you want to spend thousands of dollars for handcrafted Foo Dogs made of valuable materials or under $20.00 for simpler versions you should be able to find a pair of Foo Dogs that you find attractive. If you get figurines, make sure to place them in a prominent position near the entryway to your home. Remember that they are a pair and place them together with her on the left and him on the right.

Shi (or Chi) Lin are another popular form of guardians in Feng Shui. These guardians are sometimes known as dragon horses or Chinese unicorns or QiLin. This heavenly creature has the body of a horse covered in carp scales and a dragon’s head. These are hooved creatures who are often depicted with a horn (or two, despite the fact that they are often known as Chinese Unicorns in English). They can either be shown standing, or sitting on a pile of gold or other wealth. Shi Lin represents wealth, strength, success, good health and longevity. Historically the depiction of Shi Lin dates back to about 500 B.C. in China.

In terms of where to place them, there appears to be some schools of thought that say that you should place them in quadrants based on the cardinal directions based on what you want them to bring for you. Other schools of thought suggest that ideal placement when these are not placed by the door will vary depending on the year. In 2016, for example, some suggest placement in the east end of important rooms such as the living room, bedroom and office.

Chi Lin are also available on the internet in a variety of styles, materials and price ranges. Make sure that you place them in a pair, in a prominent location. If you adhere to the school of Feng Shui that suggests placement of guardian animals should be optimized based on the year, don’t forget to place them accordingly and to check the Chinese New Year so you know where to move them. Otherwise, on either side of the door or window, or on your desk in a prominent location would be ideal. Make sure to pick a pair that you find attractive.

So, if you want to easily and inexpensively improve the energy in your home using Feng Shui, placing a pair of Foo Dogs and/or a pair of Chi Lin may be a great way to start. Oh, and yes, you can use both if you would like. Again, make sure that the ones you choose are aesthetically pleasing to you.