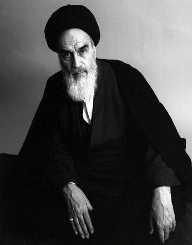 Ayatollah Ruhollah Khomeini was an Iranian Shia cleric who led a revolution that toppled the last king of Iran. He is considered the founder of the Islamic Republic of Iran.

Ayatollah Ruhollah Khomeini was born in Khomeyn, Iran on September 24, 1902. His parents named him Ruhollah Mousavi Khomeini at birth. He was the son of Sayed Moustafa Hindi and his wife Haijeh Agha Khanum. His father died in 1907 leaving Khomeini in the custody of his mother. As a child, he became an avid sportsman and academician in school. He excelled in the local religious competitions during the recitation of the Quran verses.

He became the disciple of the prominent cleric Ayatollah Abdul Karim Yazdi. Khomeini followed Yazdi to the religious city of Qom when the elder cleric migrated. He continued his studies in classical poetry, philosophy, and Islamic law. In Qom, he studied under two prominent clerics Ayatollah Yazdi and Husayn Borujerdi. Both clerics taught of the separation of religion and state politics.

Khomeini loathed the ideology of non-interference with politics. Unable to challenge his seniors in religion, he decided to teach religion Qom. He taught Islamic history, political philosophy. He created a radical following among his students who later formed the base of his revolution.

In 1961, Grand Ayatollah Borujerdi died. Khomeini moved up to fill the vacuum left by the departed cleric. He became an idol figure within the top clerics in Qom. He departed from the tradition of his predecessors. Khomeini emphasized on the jurisprudence of religion over every aspect of life. In 1962 he organized the first cleric-led protest in Iran. He created the college of religious scholars who led the opposition to the king or Shah Reza’s westernization of the Iranian society.

Khomeini accused the Shah of abandoning the Iranian culture and Islamic tradition for the western ideals that considered the Iranians as slaves. He labeled the Shah as corrupt and sympathetic to the Zionists. The shah imprisoned him in June 1963. Riots erupted in the country with demands of his release. The rioters were brutally pacified by the Iranian military. Khomeini got out of prison in 1964 and sent to Qom.

He continued delivering fiery speeches against the Shah of Iran. When diplomatic efforts were thwarted, the Iranian authorities sent him to exile. Khomeini went to Turkey. He could not practice his fiery religious tenets or dress as a cleric in secular Turkey. He left Turkey and settled in the Shia city of Najaf in Iraq. He taught the Iranian population in Najaf of his new ideology. Khomeini smuggled his fiery speeches in videotapes into Iran.

Shah Reza pleaded with the Iraqi authorities to contain Khomeini. Khomeini was given two options, either denounce his political activities or leave Najaf. He chose to leave Iraq for Paris in 1978. As the military became passive on the demonstrators, Shah Reza abdicated his throne and went to the US.

On February 1, 1979, Ayatollah Khomeini returned to Iran as the triumphant leader of the revolution. He became the unanimous leader of the nation and established the Islamic Republic of Iran. He officiated over the writing of the new Islamic constitution and pacified his opponents. He filled government positions with clerics sympathetic to his ideology. Khomeini became the Supreme Leader of Iran by law.

Khomeini demanded the return of the Shah to Iran to stand trial. Shah Reza left Europe for his exile in the US. In response, university students in the capital Tehran broke into the US embassy and took 52 Americans hostage. The stalemate stayed for 444 days and was resolved by the new US president Ronald Reagan in 1981.

Iraqi President Saddam Hussein, an Arab Sunni Muslim and traditional foe of the Persian Iran, decided to capitalize on the turmoil in Iran. He invaded Iran in June 1982. Khomeini managed to repulse the attack resulting in a six-year war between the two countries. The United Nations brokered a ceasefire deal that ended the war in August 1988. Both nations suffered massive human casualties.

During his administration, Iran transformed into a conservative Islamic nation. He introduced an Islamic dress code, institutionalized the Islamic Law in all jurisprudence, and banned alcohol. He also outlawed western films and aligned the education system to Islam. He pacified his opponents with prison, exile or death.

In 1989, the Indian-British author published the controversial book The Satanic Verses. Rushdie condemned some Islamic practices and vilified the Islamic Prophet Muhammad as a false prophet. He attracted condemnation across the Islamic world. Ayatollah Khomeini decreed a death sentence or Fatwa on the writer. In essence, any Muslim became duty bound by the decree to kill Rushdie.

On June 3, 1989, Ayatollah Khomeini died in Tehran. He left behind a widow and five children. Despite his death, the ideology of the Islamic revolution outlived leader fondly remembered as Imam Khomeini.