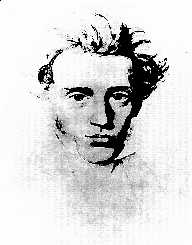 Soren Kierkegaard was born on May 5, 1813. He was a Danish philosopher who was known for his significant philosophical works. He was also a theologian and religious author. He was popularly known for his criticism of the philosophies of Georg Wilhelm Friedrich Hegel, Friedrich Wilhelm Joseph Schelling, and Karl Wilhelm Friedrich Schlegel. His works on theology mainly focused on Christian ethics and the institution of the church. He also showed a keen interest in human psychology. His psychological works explore the emotions and the feelings of individuals when facing different situations in life. He died on November 11, 1855, at the age of forty two.

Soren Kierkegaard was born on May 5, 1813, in Copenhagen. He was born to Michael Pedersen Kierkegaard who was a stern man with an ardent imagination and Ane Sorensdatter Lund Kierkegaard who was a quiet, plain lady without any formal education. In 1830, he attended the School of Civic Virtue, Ostre Borgedyd Gymnasium. He studied history and Latin along with other subjects at the school. He later joined the University of Copenhagen to study theology, but he was more interested in exploring historical works and philosophy.

In 1837, Soren Kierkegaard met Regine Olsen with whom he fell in love with. In 1840, he proposed to Regina, but because of his delusions about the prospects of marriage, he broke off the engagement in 1841. He claimed that he was a melancholic and so his personality was not suitable for wedding, however, the two were so much in love. In 1841, he came up with ‘On the Concept of Irony with Continual Reference to Socrates’ which was considered thoughtful and noteworthy by the University of Copenhagen. In the same year, he graduated from the school with a Magister Artium currently known as a PH.D.

Soren Kierkegaard wrote and published most of his works using pseudonyms while in others he signed his name as author. His first book was titled ‘De Omnibus Dubotandum est’ which was written under the pseudonym Johannes Climacus. The book was however published after his death. In 1843, he published ‘Either/Or’ which was written during his stay in Berlin. His work ‘Two Upbuilding Discourses, 1843’ was published under his name. He wrote and published the books ‘Fear and Trembling’ and ‘Repetition’ where he used pseudonyms Johannes de Silentio and Constantin Constantius respectively. In the same year, he also published ‘Three Upbuilding Discourses.'

In 1845, Soren Kierkegaard published two books ‘Three Discourses on Imagined Occasions’ and ‘Stages on Life’s Way.’He took a break to Berlin, and when he came back he published all his discourses together in a volume ‘Eighteen Upbuilding Discourses’ in May 1845. He later published two articles in response to Peder Ludvig’s criticism of his works, that is, ‘The Activities of a Travelling Esthetician’ and ‘Dialectical Result of a Literary Police Action.’ In 1846, he published ‘Concluding Unscientific Postscript to Philosophical Fragments’ and later ‘Two Ages: A Literary Review.’

In 1847, Soren Kierkegaard wrote ‘Edifying Discourses in Diverse Spirits.’ He wrote ‘Concluding Unscientific Discourses’ after he realized that people were talking about his Christianity upon his pseudonyms where he admitted to being the author of the books. In 1848, he published ‘Christian Discourses’ and ‘The Crisis and a Crisis in the Life of an Actress.’ In the same year, he wrote ‘The Point of View of My Work as an Author’ which was an autobiography of him explaining his pseudonyms. In 1849, he published the second edition of ‘Either/Or’ and ‘The Lily of the Field and the Bird of the Air.’ He also published ‘The Sickness unto Death’ and ‘Three Discourses at the Communion on Fridays.’ In 1850, he wrote ‘Practice in Christianity.‘

Soren Kierkegaard died on November 11, 1855, and he was buried at the Assistens Kirkegard in the Norrebro section of Copenhagen.