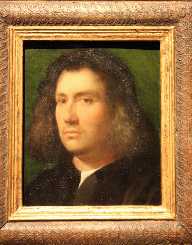 Giorgione was born circa 1477/78. He was a veteran Italian painter who lived during the High Renaissance from Venice.  Giorgione is best known for his cagey style of poetic paintings and specifically for one, “The Tempest.” Today, only six of Giorgione’s remaining paintings are traceable to him.

He earned his status as a mysterious figure in European art. It came as a result of creating his pieces with uncertainty in meaning and identity. Giorgione cofounded the Venetian School of Italian Renaissance painting. He did this alongside a much younger Titian.

Giorgione was born circa 1477/78. Not much is available about his childhood, but he grew up in the town of Castelfranco Veneto, Venice, Italy. There is a belief that he lived a humble life. Giorgione began to exhibit his artistic skills at quite a tender age. Because of his gift, at the age of twenty-three, he earned a job to paint portraits of the Doge Agostino. He also painted the condottiere, Consalvo Ferrante.

After completing his apprenticeship under Giovanni Bellini, Giorgione did his first two key paintings illustrating the “Trial of Moses” and “Judgment of Solomon.” The distinctive feature of his paintings from the rest came out in the way he put an accent in beautiful backgrounds.

The surviving pieces of paintings that have attribution to Giorgione are mainly “The Three Philosophers,” “The Tempest,” Shepherded with a Flute,” “Boy with an Arrow,” and “Sleeping, Venus.” In his career, he received credit for painting half-length portraits including “La Vecchia,” “The Young Man,” and “The Laura.”

Giorgione died October 25, circa 1510. He was approximately thirty-three years old by then. His death must have taken place at the island of Lazaretto Nuovo. After Giorgione’s death, his co-partner, Titian finalized the remaining section in Giorgione’s “Sleeping Venus.” He left behind a legacy that would later see improvement several generations later.