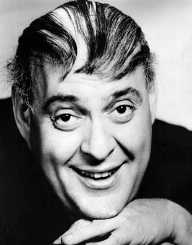 Zero Mostel was born Samuel Joel Mostel in Brooklyn, New York on the 28 February 1915 into an Orthodox Jewish family. He had seven siblings. As a child, he showed an interest in drawing and painting.

Education New York University but did not finish the course. He also attended the Educational Alliance, a Jewish organization providing opportunities for the children of immigrants in New York City.

In 1937 Zero Mostel was employed to teach art at the Young Men and Young Women’s Hebrew Association in Manhattan. As well as teaching Zero Mostel began giving art lectures at museums as part of his job which fell under the city’s  Works Progress Administration's Federal Art Project. He enjoyed lecturing and built up a reputation as a comic. In the early 1940s, he found work as a comedian in Cafe Society, a jazz club. It was around this time that his nickname Zero Mostel started being used. Initially, the club press agent had joked about Mostel being the guy who came from nothing. The nickname Zero Mostel stuck. Mostel’s comic shows proved an antidote to wartime worries and soon he had gained a name for himself. In April 1942 Zero Mostel made his Broadway debut in the show Keep ‘Em Laughing. The show was a hit, and Mostel’s then began touring nationally and also appearing on radio.

He was called up to the U.S. Army in 1943 but was discharged due to a physical disability. His contribution to the war effort from that time onwards was entertaining the troops overseas.

Zero Mostel returned from the war and decided to take up non-comic acting. His first television series was Off The Record (1948). Other appearances include an episode of The Ford Theatre Hour (1948), entitled The Man Who Came to Dinner and the hit film Panic in the Streets (1950). Zero Mostel was blacklisted in the 1950s and found it difficult to get roles on television and in film. He turned to the theatre and appeared in Ulysses in Nightown (1958), an Off-Broadway production of an episode of the Irish writer’s James Joyce’s controversial novel Ulysses. Mostel’s performance in Nightown was a hit, and he won an Obie for the performance. Later he also appeared in Nighttown in Europe.

He was blacklisted through most of the 1950s/ Once he began being offered television work after the blacklisting Zero Mostel appeared in The World of Sholom Aleichem (1959). He was in the process of preparing for a new play when a bus hit him and injured his leg, resulting in five months in hospital.

in January 1960, Zero Mostel was involved in an accident when he was hit by a bus. He was badly injured and spent the next five months in hospital. His leg was badly damaged and required several operations, but he eventually regained movement and control of the limb

Because of his left-wing political leanings, Zero Mostel was called before the House Un-American Activities Committee. He denied that he was a Communist and refused to name people he knew who could have been. This resulted in Mostel being blacklisted during most of the 1950s

In 1944 Zero Mostel married Kathryn Harkin which met with the disapproval of his parents who were both Orthodox Jews. The marriage was a happy one, and the couple had two sons Josh (b.1946) and Tobias (b.1949). He had an early marriage to a fellow student Clara Sverd (m.1939-div.1944), but the couple were incompatible and had separated in 1941 before he met Harkin. Zero Mostel died on the 8 September 1977 after suffering an aneurysm.