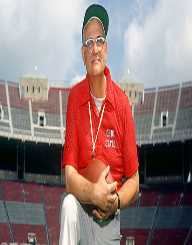 Wayne Woodrow Hayes was born on the 14 February 1913 in Clifton, Ohio. His parents were Wayne Hayes and Effie Hupp. Woody Hayes was a secondary school superintendent.

Woody Hayes attended Newcomerstown High School. He played baseball, basketball, and football, being captain of the football team in his senior year. He then enrolled at Denison University and obtained a BA majoring in English and History in 1935. In 1948, he studied at The Ohio State University and earned a master’s degree in Educational Administration.

Woody Hayes had his first coaching appointment at Mingo Junction High School, where he worked as an assistant coach. His next appointment was at New Philadelphia High School. He started as the assistant coach and then became the head coach in 1838. In 1941, he left this position to join the US Navy. When he returned from WWII in 1946, Woody Hayes became head coach of the football team at Denison University, and later, head coach at Miami University. He next career move was to take up the position as head football coach at The Ohio State University where he stayed for twenty-eight seasons.

Woody Hayes’s record over a twenty-eight season term at Ohio State University was: 238-72-10. He coached the team to thirteen Big Ten titles and five national championships.

Woody Hayes was inducted into the College Football Hall of Fame in 1983.

In 1986, the Grand Lodge of Free and Accepted Masons of Ohio presented Hayes with its annual award for distinguished service

During WWII, Woody Hayes served in the US Navy. When discharged, Hayes held of the rank of Lieutenant Commander.

Woody Hayes and Anne Gross married 1942. The couple the one child, Steven Hayes.

Woody Hayes’s health broke down in later years. He had various operations after suffering a stroke and heart attack. The legendary coach died of heart failure on the 12 March 1987 of heart failure.

When Woody Hayes died in 1987, former President Richard Nixon delivered the eulogy before a crowd of 1,500 at his funeral on 17 March 1987. Nixon spoke of their friendship. The two men had met in 1957 after a Buckeye victory over Iowa. Later in Nixon’s presidency, the two men became good friends. There was a memorial at the Ohio Stadium on the 18 March 1987, and fifteen thousand people attended. The Hayes family asked that all donations in his name be made to the Wayne Woodrow Hayes Chair in National Security Studies.

In 2005, at halftime of a game between the Buckeyes and Texas, it was announced that there would be a large three section in Ohio Stadium to honor Coach Hayes. Ohio State University made Hayes an Honorary Doctor of Humanities in 1986; they also dedicated the Woody Hayes Athletic Center in his memory. In 1983 he was inducted into the College Football Hall of Fame. A street outside Ohio Stadium is named after him.

Michael Rosenberg wrote about Woody Hayes in his book: War As They Knew It: Woody Hayes, Bo Schembechler, and America in a Time of Unrest. Rosenberg who was a sportswriter writes about the two legendary coaches and the intense rivalry that existed between the football teams of Ohio State University and the University of Michigan. This began in 1969 when Bo Schembechler started coaching at Michigan University. The book looks at the social context of the time about the Vietnam War and student protests in the United States. The main focus of the book is the rivalry between Hayes and his former protege, Bo Schembechler.

Another book, published in 2006, A Fire to Win: The Life and Times of Woody Hayes examines the life of Hayes including his massive achievements as a coach; as well as his altruistic side which he did not advertise publicly. The book was written after interviews former assistant coaches and players as well as friends.

In 1956, Woody Hayes was cautioned by the University when he gave financial assistance to some athletics. His good intention was paid for out of his pocket when a student did not have enough clothing. The Big Ten subsequently authorized schools to have loan funds to ensure players in need could get immediate financial assistance.

Woody Hayes was as known for his quick temper. In 1956, he was attempting to punch sportswriter Al Bine when he accidentally punched another man in the back. In 1965, he had to be restrained from starting a fight with Forest Evashevski, Iowa’s athletic director at the time. He shoved a camera into photographers face in 1973, and this resulted in Hayes being fined $2000 and suspended for three games. Then in 1977, he charged at Mike Freedman from ABC, a cameraman who filmed the incident. Again, Woody Hayes was fined $2000. Finally, in 1978, after punching a student during the 1978 Gator Bowl, Hayes was fired from his position as head coach. The 1978 incident involved Charlie Baumann, from Clemson University team. The Tigers were leading the Buckeyes 17-15 towards the end of the fourth quarter when the incident took place.

Despite the controversies, in their obituary, The New York Times commented that notwithstanding his displays of temper, Woody Hayes was known as a caring, compassionate man who instilled fierce loyalty into his players and others who knew him well.