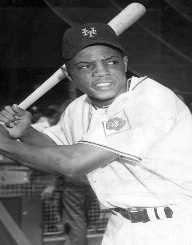 Willie Mays is a retired baseball player, nicknamed "The Say Hey Kid." He used to play in the Major Baseball League as the central fielder.

Willie Howard Mays, Jr. was born on 6th of May 1931 in Westfield, Alabama, United States. His parents were Willie Mays Sr “Cat” Mays, a baseball player playing in the Negro team for the local iron plant, and Annie Satterwhite, a basketball and track star. As his parents were no longer together since he was young, Willie Mays was looked after by his maternal aunts Sarah and Ernestine.

His father was the significant influence on his baseball life. Willie used to sit on the sidelines to watch Cat play when he was ten years old. He attended the Fairfield Industrial High School, where Willie tried out baseball, basketball, and football (as the quarterback). He graduated from High school in 1950.

Willie Mays went semi-pro when he joined Chattanooga Choo-Choos, Tennessee, during the summer holidays in1947. At the age of seventeen in 1948, Willie joined the Birmingham Black Barons, which went to Negro Leagues World Series. When he was still in school, he was scouted by Boston Braves, Brooklyn Dodgers, and New York Giants. Ultimately, New York Giants signed him on $4,000 to their Class-B affiliate in Trenton, New Jersey. He wore number 24.

Willy Mays’ first appearance in major league was in Philadelphia in 1951. Mays moved to Harlem, New York. Willie won Rookie of the Year despite the statistics being the lowest in his career. When he was drafted into the Korean War in 1952, Willie missed two seasons of Major Baseball League but returned to become MVP in 1954. When he was with New York Giants, Willie Mays was part of a triumvirate of Hall-of-Fame center-fielders.

In 1958, Willie Mays relocated to San Francisco with the franchise, becoming San Francisco Giants. He hit his career high that year, with four home runs against the Milwaukee Braves. He was made team captain in 1961. Willie was traded to New York Mets in 1972; he was forty-one years old. The main reason was Giants could not guarantee his income after retirement; he was playing only part-time. Giants retired his number when he joined Mets.

With Mets, he hit his 660th home run and helped the team reach the post-season for only the second time in the club's history. In 1973, Willie Mays was honored by the franchise with ‘Willie Mays Night,’ where he announced his retirement.

Willie Mays was New York Mets’ hitting instructor until the end of the 1979 season while continuing to make public appearances on television shows and non-sport related media.

In 1979, Willie accepted a public relations position with Bally’s casino with Mickey Mantle. Serving as a Special Assistant to the Casino's President and as a greeter. Commissioner Bowie Kuhn banned the pair from baseball-related activities, saying that they “could not be both a coach and baseball goodwill ambassador.” Willie Mays chose to terminate his baseball relationships until Commissioner Peter Ueberroth lifted the ban in 1985.

After the ban was lifted, Willie Mays in 1986 became a full-time special assistant to the Giants. He also served on the advisory board of the Baseball Assistance Team, a setup dedicated to helping former players through difficulties.

Willie Mays has a holiday: Willie May Day is May 24 in San Francisco and the state of California. President Barack Obama also awarded him Presidential Medal of Freedom in 2015. Willie also received the Bobby Bragan Youth Foundation’s Lifetime Achievement Award. He was inducted into the California Hall of Fame and the African-American Ethnic Sports Hall of Fame.

Willie Mays also have a godson, who is slugger Barry Bonds. Barry’s father Bobby was a teammate and close friend in San Francisco.

Willie Mays denied taking drugs during his career. But in the Pittsburgh drug trials in 1985, his former Mets teammate John Milner testified that Willie Mays had liquid amphetamine in his locker. However, John admitted that he never witnessed Mays taking it.